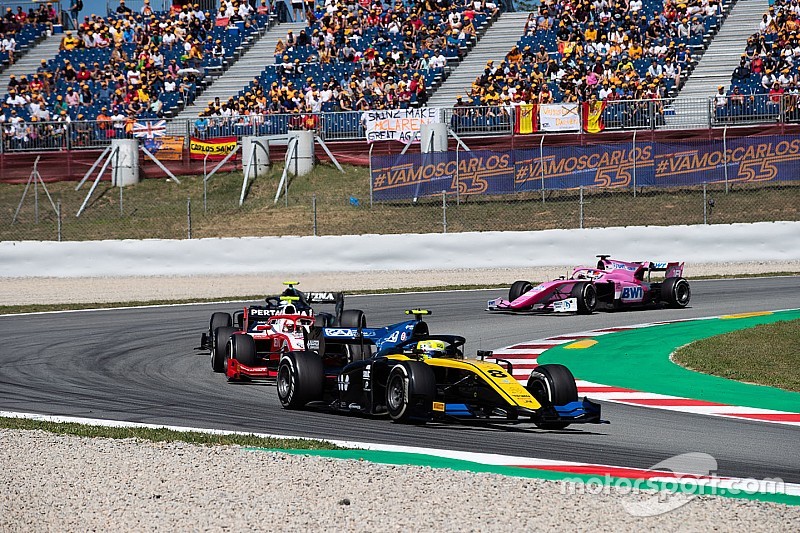 De Vries said Ghiotto was “35 seconds quicker, that’s almost a second a lap” on Saturday, as the Italian fought from the back of the grid to finish fourth, one spot ahead of de Vries.

"If you start analysing from that point it’s a long evening I can tell you that, my sleep wasn’t great,” the Dutchman told Motorsport.com after winning Sunday's race.

“You have to keep the faith and today proved there is no magic, anyone can do the job. I’m happy and proud of that.”

De Vries, who replaced current Williams Formula 1 driver and reigning F2 champion George Russell at ART this season, added that the team “didn’t turn the world upside down” in terms of set-up changes for Sunday.

The ex-McLaren F1 junior passed early leader Anthoine Hubert and streaked to a comfortable victory, taking the team's first win since Russell triumphed in Abu Dhabi at the end of 2018.

“This category is so difficult and you have to be so precise,” added de Vries. "We didn’t turn the world upside down, just little changes and little changes make one big change.

“You always have to keep the faith and even if one day looks bad, things can turn around for the next day. I’m especially relieved for that.

“I always trusted in the team and our potential together. I’m very happy and proud to show we can turn things around in the weekend.”

UNI-Virtuosi driver Ghiotto made a poor start from pole in Saturday's feature race, and then dropped to the rear after he was hit by Dorian Boccolacci on the opening lap.

From there the Italian was able to salvage fourth place, and he said he was “afraid” his pace would end up destroying his tyres.

After scoring second in the sprint race on Sunday, Ghiotto said: “The team is doing a great job, everybody in the paddock is trying to understand why we are so quick.

“The others did a better race today than yesterday and If I had a better start it may have been easier to move forward. But after yesterday we still have to be happy with the weekend.”

Ghiotto lies second in the points after Barcelona, 26 behind Saturday race winner Nicholas Latifi, while de Vries is a further four points back in third.