The Formula 1 superlicence system is set to be overhauled to make it “almost compulsory” for aspiring drivers to race in Formula 2, according to F2 technical director Didier Perrin.

At present, the champions of F2, European Formula 3, Formula E, IndyCar and the World Endurance Championship's LMP1 class all receive the 40 points required to gain the superlicence necessary to race in F1.

If a driver does not win one of those series, they must have compiled at least 40 points over a three-year period to qualify for a superlicence.

Speaking at the launch of the new F2 car, the F2 2018, at Monza last week, Perrin explained that the superlicence system is going to be changed to promote the F2 category by offering more points to its successful competitors.

“The superlicence points system is going to be revised,” he told Motorsport.com.

“It's going to become almost compulsory to race in F2 – it won't be mandatory in theory, but it will be the preferred path to F1.

“It's very important – we want to give some value back to the driver's competitiveness rather than their wallet.

“It will promote F2 a lot, as it will be the category that gives the most points and the best technical preparation to go to F1.

“It will be published soon. I don't want to speak on behalf of the FIA, since the FIA is going to give it, but everything will be done for F2 to become almost a prerequisite for F1.”

The F2 championship was rebranded from GP2 ahead of the 2017 season and moved under the FIA’s regulatory control, which effectively completed the governing body’s aim of having a ‘pyramid’ for single-seater competition – from Formula 4 to F1.

The launch of the F2 2018 – the first new single-seater to feature the halo cockpit protection device – was attended by Ross Brawn and Charlie Whiting, who hinted at closer future ties between F2 and F1.

There were also suggestions that F1 is missing a MotoGP style Moto2-Moto3 progression system that would have potential commercial and sporting benefits to the two categories. 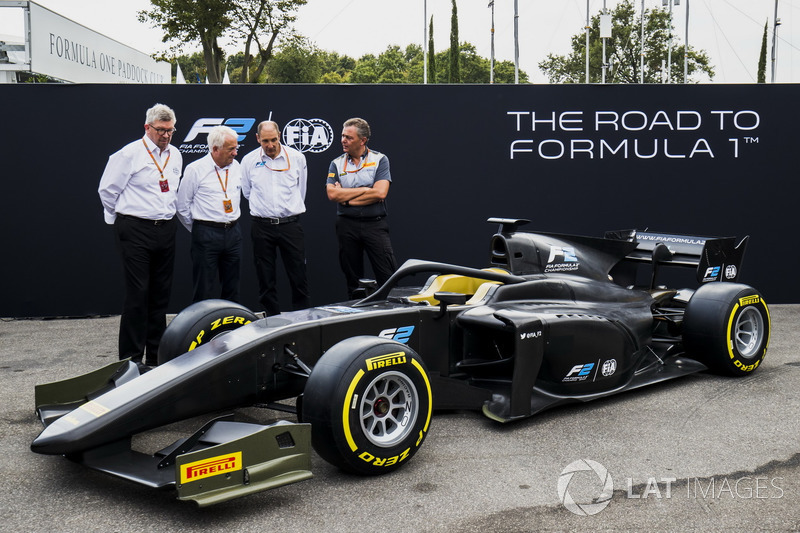 The new F2 car is unveiled in the paddock

Perrin also explained that the F2 2018 has not be designed to be quicker than the GP2/11 car that the series has used for the last seven seasons.

It will maintain similar levels of performance in terms of laptime but will switch to a 3.4-litre turbocharged engine.

When asked if the new car would have more downforce than its predecessor, he said: “Marginally, but we did not seek to go faster.

“We think the performance and positioning of the current F2 car are very much what the drivers need to prepare for F1.

"Our goal was not to go quicker, we just want to have the same level of performance as the current car, but with a car which is closer to F1, so that the drivers are better prepared for F1.”

Binder to replace Merhi in Jerez F2 round