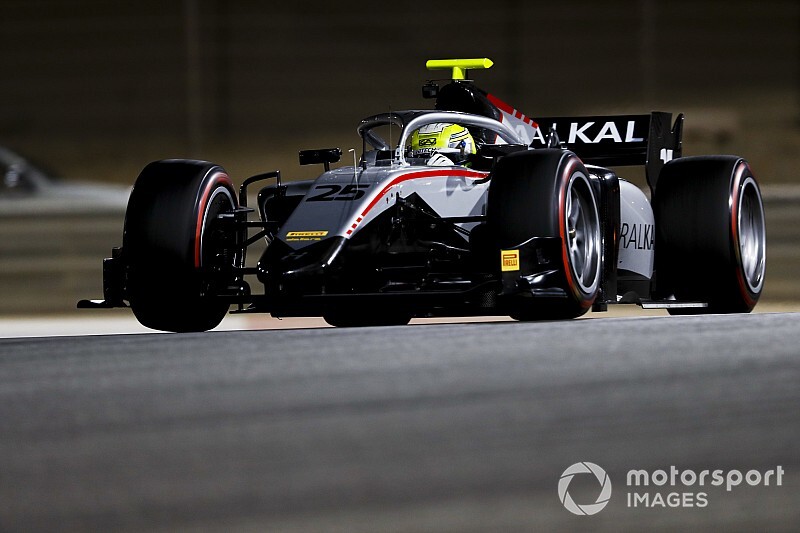 Ghiotto, who was set to conclude his junior single-seater career last year but has signed on for another year of F2 to partner Nikita Mazepin at Hitech, set the fastest time of the test with half an hour to go in Wednesday's final session.

His benchmark, a 1m41.252s, was just eight thousandths better than what Carlin rookie Jehan Daruvala had managed in the dying minutes of Tuesday's afternoon running.

The three-day test marked F2's first collective running with 18-inch tyres, which the series is introducing this year ahead of F1 making the same switch in 2021.

New Red Bull junior Daruvala was the only driver to top more than one of the six sessions across three days, as he went quickest in the afternoon of day two and the morning of day three.

Daruvala's fellow rookie Felipe Drugovich made up the combined top three of the test for MP Motorsport, finishing 0.072s adrift of Ghiotto on Wednesday.

Ghiotto's former teammate Guanyu Zhou was a tenth behind Daruvala on day two, and thus ended up fourth in the combined order for UNI-Virtuosi.

Charouz's Pedro Piquet made it three F3 graduates in the top five, having topped Monday's running with a 1m41.877s and then improved by four tenths on the second day of testing.

Sergey Sirotkin, called up by ART to substitute for the quarantined Christian Lundgaard, was eighth, ahead of MP's Nobuharu Matsushita and Mazepin.

Former GP2 race winner and Formula V8 3.5 champion Tom Dillmann replaced Trident's 2020 signing Marino Sato on Monday afternoon in order to provide feedback on the new tyres. His best time from that session was enough to put him 20th overall, three places ahead of Sato.

The 2020 F2 season is due to begin in Bahrain later this month, while an in-season test in scheduled for Barcelona for the beginning of April.