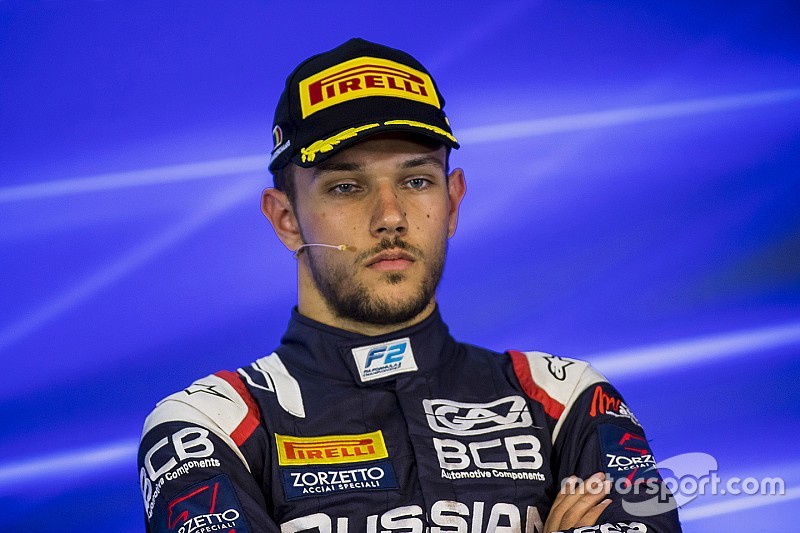 Luca Ghiotto has lost his Monza Formula 2 feature race victory after being given a five-second penalty for cutting the first chicane on the chaotic final lap of the event.

Prema Racing’s Antonio Fuoco inherits the wet-weather race win from his compatriot, with Nicholas Latifi elevated to the podium behind Nobuharu Matsushita. It is Fuoco’s first F2 race win in his rookie season in the category.

Ghiotto was leading at the start of the final lap of the race, which had been delayed by almost two-and-half hours due to the wet weather that also caused a lengthy suspension of qualifying for the Italian Grand Prix, as he fought Nyck de Vries and Charles Leclerc for the win.

But the Russian Time driver took to the escape road at the Rettifilo chicane while under pressure from de Vries, who was eliminated from victory contention when he clashed with Leclerc on the exit of Turn 2 just seconds later.

Despite the two cars behind him falling out of contention – Ferrari Formula 1 junior driver Leclerc went off into the barriers approaching the Curva Grande – the stewards decreed that Ghiotto had “gained an advantage after exceeding track limits”, according to an F2 statement.

The decision means Ghiotto drops to fourth in the final results and he loses his second career win in GP2/F2. He has also lost his fastest lap, which he set on the final tour, with Latifi now given the four points for that achievement.

De Vries was given a drive through equivalent penalty of 20s after the stewards decided he was at fault for the clash with Leclerc. The Racing Engineering driver was already classified as 18th and last after picking up a puncture in the incident, with Leclerc ultimately finishing one spot ahead.

Those places remain unchanged as McLaren F1 junior de Vries – who had led the majority of the race after making a rapid start from second on the grid – was the final classified runner.

ART Grand Prix driver Alexander Albon has also been given a post-race penalty – an additional 10s have been added to his race time for causing a collision with Arden International driver Norman Nato on the final lap. That decision drops Albon to 14th from fifth, and promotes Sean Gelael to that place.

Sergio Sette Camara is now sixth in the results, ahead of Louis Deletraz and Gustav Malja, who will start the reverse-grid sprint race from pole for Racing Engineering.

Leclerc’s championship lead remains the 59 points he entered the weekend with as his nearest title rival – DAMS racer and Renault F1 development driver Oliver Rowland – retired from the feature race when the left-rear wheel came off his car shortly after his pitstop.

Rowland will start Sunday’s second Monza race from 19th on the grid, directly behind de Vries and Leclerc.