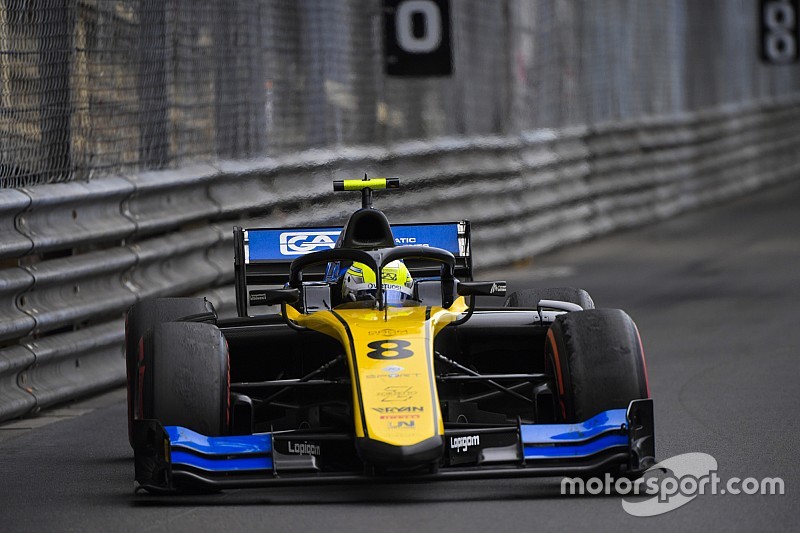 Ghiotto fought hard to take second on the road, and claw back points on series leader Nicholas Latifi who went point-less for the first time in 2019 with a 13th-place finish.

But after the race Ghiotto’s Virtuosi Racing-run car was deemed to have rack stops that were too thin. The rack stops hold the steering rack in place and prevent it from moving too much in case it damages parts internally.

Virtuosi Racing representatives provided data that they hoped would prove that part was worn down during the race after Ghiotto had hit a barrier, but the officials elected to exclude Ghiotto as the part was still in breach of the regulations, regardless of any incident in the race.

It means Ghiotto’s 18 points are taken away and instead of being eight points off the series lead, he is now 26 behind Latifi and 24 behind new second-place driver Nyck de Vries, who won the feature race.

The findings of the stewards read: “Having considered the matter extensively, the Stewards make no judgement as to how the rack stops became thinner than specified in the Technical Regulations.

“The Stewards acknowledge that there is a possibility some damage occurred to the rack stops during Race 1.

“However, the fact remains that all concerned agree that the rack stops inspected in post-race scrutineering did not meet the specified thickness.”

Ghiotto faces a double whammy as not only are his points for race one taken away, he will also have to start race two at the back of the grid.

MP Motorsport's Mahaveer Raghunathan was also penalised, after he punted Jack Aitken into the barriers at the Fairmont Hairpin with two laps to go.

He was given a 20-second penalty in lieu of not being able to conduct a drive-through penalty as it was awarded after the race. It drops him to 16th and promotes Alfa Romeo Formula 1 junior Tatiana Calderon to 15th for Arden.

He was running as high as fourth in the early going of the feature race, but a slow stop dropped him back in the pack. He finished ninth but moves up a spot owing to Ghiotto’s exclusion. Carlin’s Louis Deletraz had been in line for Saturday’s pole having finished eighth on the road.