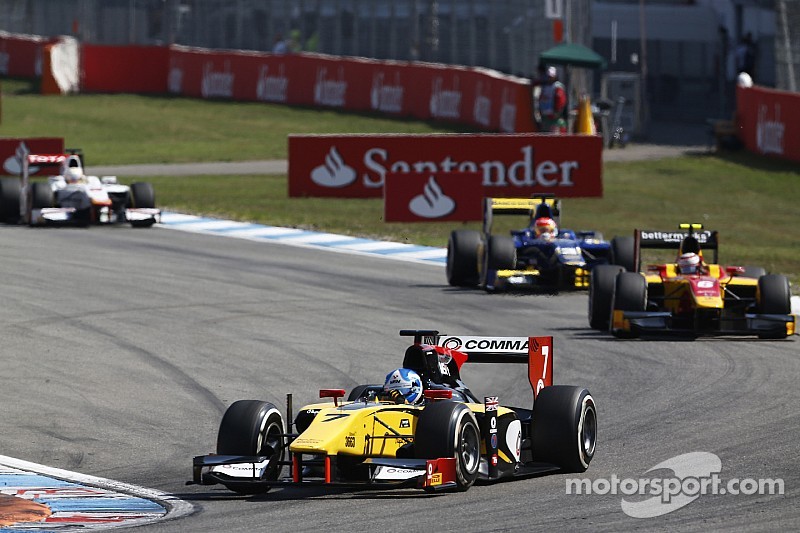 Just a few days after the end of Round 6 at Hockenheim, the GP2 paddock has moved to Budapest for the seventh round of the 2014 season.

With little time to rest and to reflect on the events which took place in Germany, the teams and the drivers arrive at the Hungaroring, some galvanised from their previous great results and others more in doubt. But doubt not Mitch Evans and Stefano Coletti: they stunned the rest of the field at Hockenheim to take two superb wins in dramatic races.

The two men are eager to repeat their feat, but they will most probably be challenged by hungry and talented rivals, starting with Series leader Jolyon Palmer. The Briton is still the only man to have scored in every single race. He’s also never qualified lower than second and has scored 7 podiums in 12 races this season. It is no surprise that he is the man to beat in 2014.

Hi closest rival Felipe Nasr has also displayed another stellar performance in Germany to claim a sixth podium, but he still remains 41 points behind Palmer in the drivers’ standings. The Brazilian will need a perfect weekend at Budapest – and maybe a not-yet-seen weakness from the DAMS ace.

Another man has clearly gotten back into the game: with a fourth podium in six races (and finally some points in a Sunday race) rookie Stoffel Vandoorne arrives in Budapest with the ambition to claim another win – especially since he saw both wins at Hockenheim slip out of his grasp. Add to that list this season’s double race winner Johnny Cecotto and many more blood thirsty youngsters for glory and this new round should be another GP2 classic.

Pirelli have nominated P Zero White medium and P Zero Yellow soft tyres, the same as Germany. This means that the teams will have accumulated plenty of recent relevant data about the compounds, which will help them in their preparations for the race.

Pirelli’s racing manager Mario Isola says: “The Hungaroring is the slowest permanent circuit that the GP2 Series visit all year, with high temperatures and little chance for the tyres to cool down because of the lack of straights. As overtaking is not easy, strategy will become a key element in gaining track position, as we saw in Hockenheim. Even if a driver qualifies low down the grid, with the right strategy they still have the possibility to do well. The cars tend to run maximum downforce, which means that there are a lot of forces affecting the tyres at the same time: downforce as well as lateral and longitudinal forces, which tend to be quite well-balanced over the course of the lap. Looking after the rear tyres will be particularly important, and as the track is not extensively used over the course of the year, we expect to see quite a high degree of track evolution during the weekend. While we’re definitely expecting warm temperatures, we’ve raced there with rain in the past as well.”

Simon Trummer, Rapax:  “The track is quite narrow, but it’s a very nice layout although you can never rest except during the long straight. Some parts are quick, others are slow: for me, the Hungaroring is one of the best tracks because it has everything to display the drivers’ skills. You need to feel confident in the car because it is a challenging circuit.

“You can overtake at the end of the straight and maybe around Turn 2, but other than that this is not the easiest track to overtake. Regarding tyre degradation, it was really high last year because it was so hot then. Normally in Budapest, we see high temperatures. This year, if it is the case again, we may struggle once more with the degradation.”

• Stoffel Vandoorne and Jolyon Palmer are the only two drivers to have finished every single race this season.

• Palmer remains the only driver to have scored in every single race in 2014. He also took three pole positions out of six qualifying session.

• Felipe Nasr still has the most wins this season (3) recording six podium finishes out of 12 races.

• Vandoorne has scored four podiums in the last six races. The Belgian has also scored his first points in a Sunday race at Hockenheim.

• Every team has now scored points in this year’s standings.

• There is one driver change this weekend: Kimiya Sato returns to car #27 at Campos Racing.

Rossi and Campos have strong GP2 Sprint Race in Hockenheim