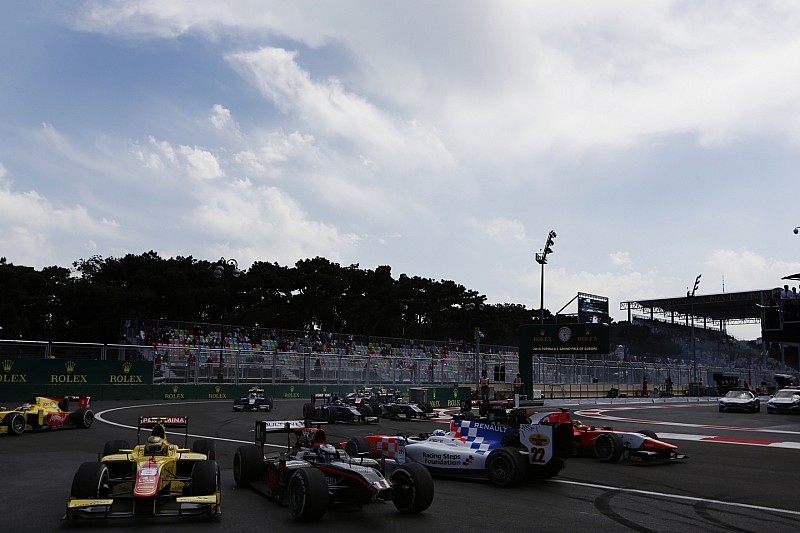 A number of GP2 drivers suggested that the FIA needs to change the rules for safety car restarts in Baku after the category's sprint race was littered with crashes on the main straight and Turn 1.

The chaos on the restarts eliminated a large number of drivers in contention and allowed Antonio Giovinazzi to fight through to victory, the Italian having been dead last after lap one.

Every safety car restart of Sunday's race was a troubled affair, with leader Nobuharu Matsushita catching the safety car before the restart line on the first attempt, slowing up and bunching up the pack behind him on second attempt and, finally, crashing with Raffaele Marciello at Turn 1.

Having survived the mayhem to finish ninth, Williams development driver Alex Lynn told Motorsport.com: "I think part of the issue is that the safety car line starts at the start of the pitlane.

"The whole of the last sector is basically a straight line, so you're obviously just gonna get a massive tow. And every guy that leads the race doesn't want to lose the lead at the restart.

"I think what would've been more sensible is if the safety car could have turned its lights off earlier, the leader could back up earlier and then actually have a run through the last sector - and then you might overtake him, but it's not going to be just a complete tow."

Lynn, who was taken out in a Turn 1 incident in the opening race, also suggested the tow on the main straight was responsible for many of the crashes in that corner.

"There's a massive slipstream, it's easy to make a mistake at 330 km/h in these things on low downforce - and the track surface doesn't give much grip - it's a cocktail for some mistakes."

Carlin's Marvin Kirchhofer agreed that changes needed to be made to the procedure, telling Motorsport.com: "The track is really nice, it's a really cool track - but it's just too long a straight for a safety car restart - too many guys towing each other, going four cars side-by-side.

"They should find a solution for the safety car restarts - maybe just saying that it's not allowed to pass into Turn 1.

"Everyone would cool down because everyone knows, 'okay, I can't pass into Turn 1', so we can just stick in line like you normally do - that would be the right solution, but like this it's too crazy, too dangerous."

Trident's Luca Ghiotto, however, noted that, while the safety car restarts were strange in Baku, it was just the FIA making the best of the situation.

Ghiotto, as well as a number of other drivers, placed the blame for the chaos squarely on Matsushita.

"I think he should be penalised because what he did was too dangerous," Ghiotto said. "If nobody was ready to skip the other cars, it would've been a big crash. Especially here with the long straight, it was far too dangerous."

It was a similar assessment from Campos Racing's Sean Gelael, who was forced out of the race in Turn 1.

"He braked about three times [on the second restart], it must've been chaos and it was dangerous," Gelael told Motorsport.com. "Not only did it cost me and some other drivers the race, it could've cost something bigger than that."

Daniel de Jong, who was in contention for a podium before running wide at Turn 1 on the first restart, said that Matsushita had been inconsistent on the gas at that moment as well.

"His approach to the rules was not really the cleverest, it was dangerous," de Jong told Motorsport.com. "But maybe the rules can be changed to help that."

Finally, Gustav Malja, who was caught out by the stop-start nature of the second restart and crashed into Mitch Evans, told Motorsport.com: "[Matsushita] did something which is completely against the rules.

"As soon as you go on power in a significant way, you're not allowed to brake cause that's a brake test. And he did this at a very high speed."