GP2 Round 11 in Abu Dhabi: The games are not over yet 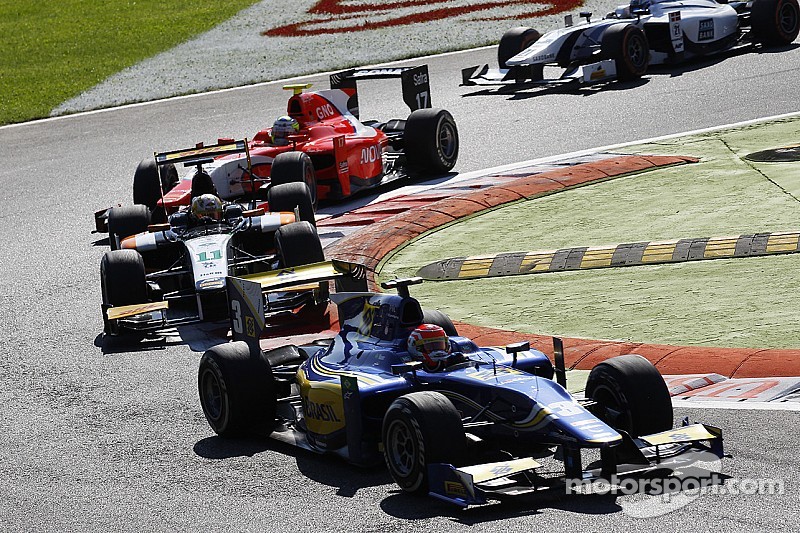 The battle between Felipe Nasr and Stoffel Vandoorne for second place in the Drivers’ standings comes to an end.

Don’t think that because this season has found its Champion in the name of Jolyon Palmer, it means that the games are over: there are still some very important things at stake starting with the battle between Felipe Nasr and Stoffel Vandoorne for second place in the Drivers’ standings. Both men have had a strong season earning four and three wins respectively.

The Brazilian has more experience which he’s put to good use, but the Belgian rookie is on a roll having snatched three pole positions in a row. The two men have achieved the same number of podium finishes (9) and are both on the hunt for big points and glory this weekend at Yas Marina Circuit for the final round of the 2014 season.

It’s not the easiest track for overtaking.

Add to the suspenseful mix the fight for the Teams’ crown: DAMS and Carlin have been fighting all season long for the prestigious trophy. The French team are eager to reclaim the GP2 title whilst the British squad are still reeling from their bitter second place from 2013 after finishing on the same amount of points as RT RUSSIAN TIME but losing out on the crown. DAMS are leading Carlin by 51 points leaving the British team with no margin for error.

At the smooth Abu Dhabi circuit, characterised by warm weather, fast straights and 90-degree corners, Pirelli will provide the drivers with the medium and supersoft tyres. A significant performance gap is expected between the two compounds. Unlike Formula One, where the race starts in the late afternoon and ends in the evening, GP2 will race at various times during the weekend.

The qualifying session on Friday and the race on Saturday take place in the evening, while Sunday’s race is in the heat of the day. With practice scheduled for the morning, teams will have to cope with a wide variety of track and ambient temperatures. As a result, conditions in practice and qualifying will not necessarily be representative of what drivers are likely to find in the race – making the strategy very hard to calculate.

With a number of 90-degree corners leading onto straights, traction is one of the most crucial aspects of Abu Dhabi. While the surface is only mildly abrasive, drivers must take extra care to avoid wheelspin, which takes life out of the rear tyres.

There will be 3 driver changes this week: Conor Daly returns to Venezuela GP Lazarus in car #25 whilst Hilmer Motorsport will race this weekend with rookie Nicholas Latifi in replacement of Daniel Abt, and Kevin Giovesi joins Rapax in car #14.

“The varying conditions are likely to be the biggest challenge for the GP2 drivers at Abu Dhabi, and this means that drivers have to adapt their driving style to extract the maximum performance from the package. As the championship is decided in GP2, we can look forward to a straight fight for victory. Track evolution affects the support Series even more than Formula One, as they are first onto the track.

In GP2, the big challenge as ever will consist in getting the most out of the softer compound in qualifying, despite not having driven on it extensively beforehand due to the limited allocation available. There is likely to be quite a significant gap between the medium and supersoft compounds, meaning that the teams are likely to use the supersoft almost like a qualifying tyre, although of course both compounds must be used during Saturday’s race.

With both GP2 drawing to a close, we’re delighted to take part in a number of promotional activities in Abu Dhabi that showcase the series, such as the pit stop challenge on Thursday.”

Felipe Nasr (Carlin): “This is the final round of the season. Yas Marina is a good place that I enjoy. The track is a bit different from the European tracks: it’s all about the braking zones with a lot of slow corners. You need a car that brakes pretty well and has good traction coming out of the corners. It is very important to get the corners right to achieve a good lap. It is a very long circuit and you can feel it in the car: it takes a long time to drive around. “It’s not the easiest track for overtaking.

There are two long straights, but you’re coming out from such a slow corner – like a hairpin, so that makes it difficult to overtake the car in front. You can more easily pass cars in the early laps or when the tyres are degrading.

• Raffaele Marciello will lose five positions on Yas Marina Feature Race starting grid following a penalty he picked up last month during Sochi Sprint Race (for causing a collision with Palmer on lap 1 at Turn 2).

• Both the Qualifying session and the Feature Race will take place at night.

• Felipe Nasr has been confirmed by Sauber F1 Team for the 2015 season.

• Campos have announced that Arthur Pic will race again with them in 2015.

• You can re-watch every round video highlights on the official website // Multimedia Section.

Conor Daly to wind up GP2 season in Abu Dhabi