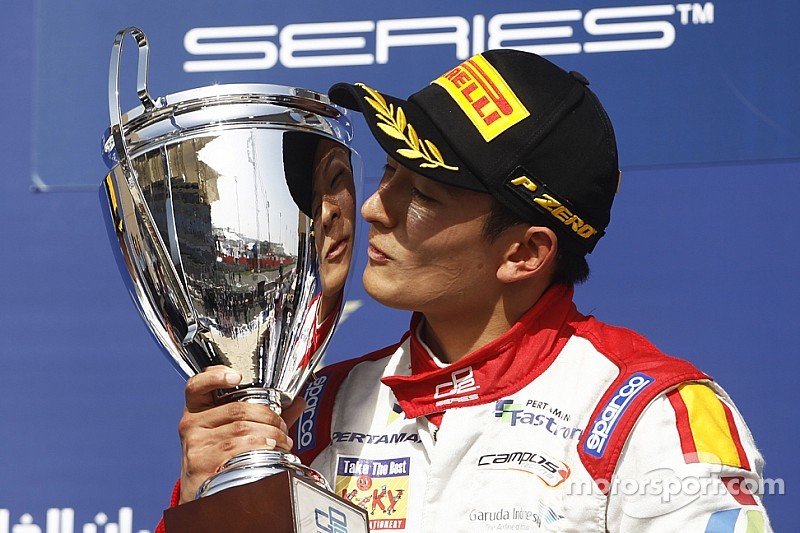 Indonesia’s Rio Haryanto won his first-ever GP2 victory in his 70th start in the series, charging through from seventh on the grid and holding off the challenge of yesterday’s winner Stoffel Vandoorne.

Haryanto made a blinding start from P7 to grab third position into Turn 1, as poleman Julian Leal led a fast-starting Mitch Evans.

Leal pushed hard in the early stages, and extended a 2.1s lead as Haryanto passed Evans for second at Turn 1 on lap four.

Haryanto quickly closed down Leal, and took the lead at Turn 1 on lap eight. Evans then attacked Leal, but during their battle they touched on the exit of the Turn 8 hairpin, Evans being sent pitwards with a puncture.

Robert Visoiu briefly held second, after passing Leal at Turn 1 on lap 10, but the ART cars were ominously marching their way towards the front. Nobuharu Matsushita led yesterday’s winner Vandoorne for much of the race, but the Belgian had cannily managed his tyres in the early stages, and unleashed his true pace in the latter stages.

After DRS-ing past his Japanese teammate with six laps to go, Vandoorne attempted to close down leader Haryanto.

The prize was becoming only the third man in history to win both feature and sprint races on the same weekend, but Haryanto kept the gap at 3s. “I just couldn’t catch him at the end,” Vandoorne admitted.

Alexander Rossi shadowed Vandoorne’s moves after a poor start, coming through to run third in the closing stages.

But Nathanael Berthon, who made a terrible start from the front row, came into his own in the last few laps, and charged back to fourth. He grabbed the final spot on the podium with a DRS-assisted pass on Rossi at the start of the final lap.

Matsushita’s early push cost him dearly in the latter stages, and he tumbled back to fifth, ahead of Leal and Visoiu.

The main incident of the race was when Jordan King clashed with Sergio Canamasas on the exit of Turn 4, both lucky to avoid a huge accident. King recovered to finish ninth.