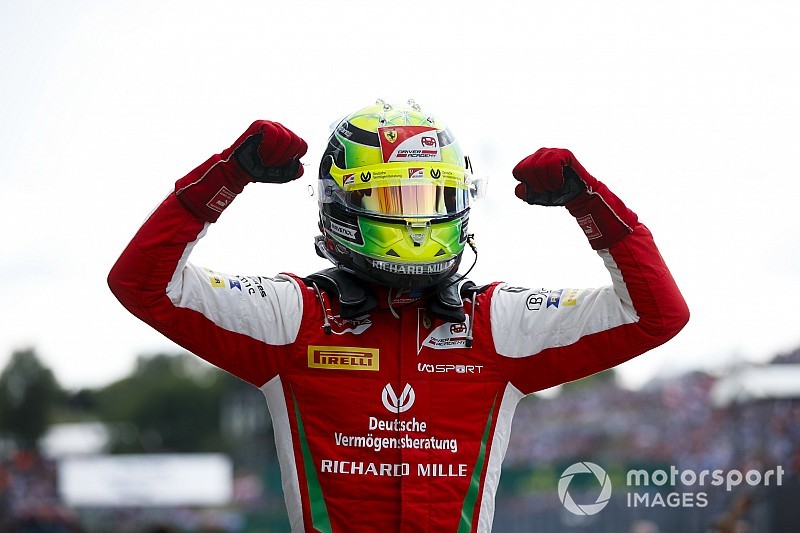 The Prema driver, who started on pole after finishing eighth in Saturday's first race, maintained the advantage at the start ahead of Carlin driver Nobuharu Matsushita, and fended off his rival for the remainder of the 28-lap distance.

Schumacher, son of seven-time Formula 1 champion Michael, finally crossed the line with 1.4 seconds in hand over Matsushita for his first win at F2 level.

"Amazing race," said the 20-year-old. "The car was great, thank you for the team. Credit to Nobu who kept me entertained. It wasn’t easy.

"I am just so happy. Quite hard. Obviously the tyres were degrading and not easy to keep them alive, always having pressure and checking mirrors. It was entertaining."

The gap between the lead pair fluctuated throughout the race, as Honda protege Matsushita appeared to cool his tyres and then close back in on Schumacher.

Matsushita also fended off a mid-race attack from DAMS driver Sergio Sette Camara, who scored the final spot on the podium ahead of MP Motorsport's Jordan King.

It means the gap between de Vries and Latifi stands at 30 with four rounds remaining.

Luca Ghiotto (UNI-Virtuosi) scored the final point in eighth after making a poor start from fourth on the grid, the Italian slipping to fourth in the title race behind Sette Camara.

Tatiana Calderon (Arden) was the sole non-finisher of the race, terminally damaging her suspension after early contact with Arjun Maini (Campos).