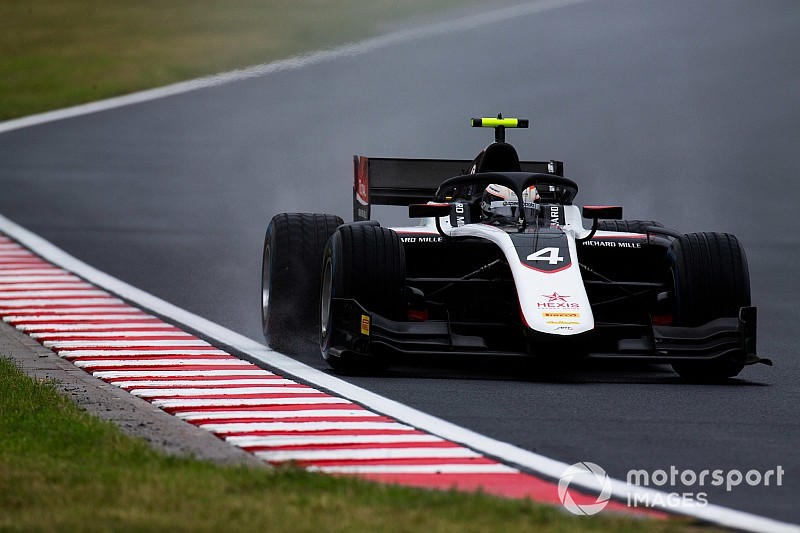 On a soaking track, Nikita Mazepin spun at the chicane in the early seconds of the session and stalled to bring out a red flag almost immediately.

After that, ART Grand Prix’s de Vries and Virtuosi Racing’s Ghiotto were majestic, clearing the rest of the field by over two seconds on their first runs as they explored the limits of the wet track.

But just after de Vries pitted with 13 minutes to go, the constantly-improving Nicholas Latifi stormed to the top of the time sheets for DAMS, the Williams junior 0.242s going clear of de Vries.

It took until the last five minutes for more improvements, and after emerging from a pitstop de Vries strung together three session-best sectors to move 0.769s clear of Latifi.

Ghiotto emerged from the pits and got within 0.227s, but had to settle for second place.

No one else would come close, as Latifi failed to best his earlier effort and remained third on the grid for Saturday’s feature race.

Carlin's Louis Deletraz was another driver to improve late on, leaping ahead of Sauber Junior Team driver and Ferrari junior Callum Ilott, the last driver within a second of pole.

Jack Aitken set a session-best sector on his last run but couldn't nail the tricky final corner and had to settle for seventh with Campos Racing.

Honda junior Nobuharu Matsushita took eighth despite leaping over the chicane curbs on his last effort in the second Carlin entry.

UPDATE: Both Hubert and his Arden teammate Tatiana Calderon, who had qualified 18th, were subsequently excluded for tyre infringements.

The stewards found that one tyre on Hubert’s car was one of Calderon’s nominated tyres, and vice versa. Both cars will have to start from the back of the grid in Saturday’s feature race.