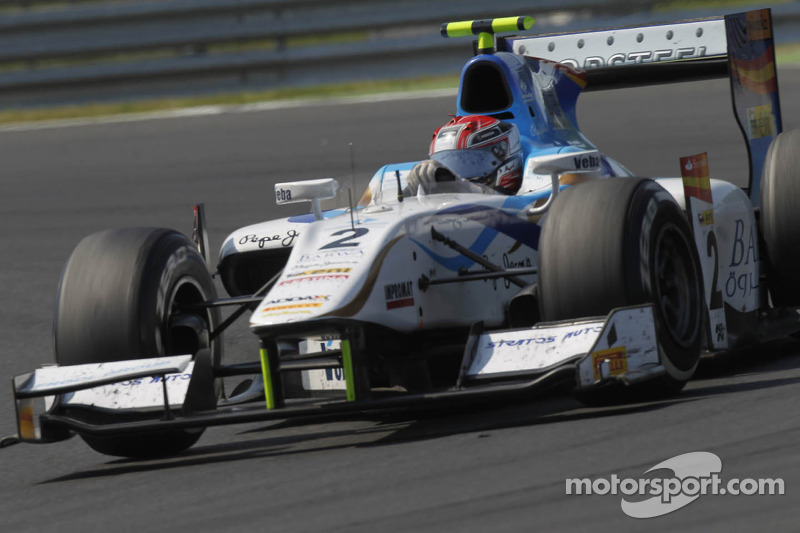 Josef Kral has claimed his maiden GP2 victory with a storming start and mature drive to claim the win in this morning's sprint race in Spa Francorchamps, winning by five seconds from Felipe Nasr, who stole second from James Calado at the final corner.

The Czech driver's victory was set up at the start: front row starters Nasr and Julian Leal were slow to get off the line and had no response to Kral's flying getaway, with Calado following him inside and through at turn one. They stayed ahead of the mayhem behind when Johnny Cecotto spun Max Chilton into Nathanaël Berthon's path, while Giedo van der Garde was squeezed by Davide Valsecchi and Leal at the exit.

Up the hill and Calado was lucky to stay on track when he and Luiz Razia came together: the Series leader spun and his title rival Valsecchi had to take to the grass to avoid him, with the pair soon back in the pits for a check up, along with most of the first corner incident drivers.

Further back and Esteban Gutiérrez was determined to make up for yesterday's bad luck as he worked his way through the field: P8 at the end of the first lap, he soon disposed of Marcus Ericsson, Rio Haryanto and Stéphane Richelmi, but a run up the inside of Leal ended in heartbreak for the pair as they came together and spun, undoing all their good work.

Ericsson and Fabio Leimer were there to pick up the pieces, with Leimer in particular looking very committed as he ran around the outside of Stefano Coletti at Blanchimont in one of the braver moves of the season. As the laps ran down Ericsson put himself right on the back of a late developing squabble between Calado and Nasr, and was clearly hoping for his second podium of the weekend.

When the flag dropped it was Kral who took all the plaudits for a mature drive to victory, but all eyes were looking behind the Addax to see what would happen. Into the bus stop Calado held position, but Nasr got inside him at the exit and outdragged the Lotus driver to the line, with Ericsson following them home in fourth. Leimer finished a lonely fifth ahead of Richelmi and Haryanto, with Coletti mugging Leal on the last lap for the final point.

The result means that it is all even at the top of the title standings, with Razia and Valsecchi both on 204 points, ahead of Calado on 160 and Gutiérrez on 150, with van der Garde on 141 points and Chilton on 124, while Lotus GP tops the team's title race on 310 points from DAMS on 289 and Arden International with 208 points as they all look towards the Monza event in just one week's time.