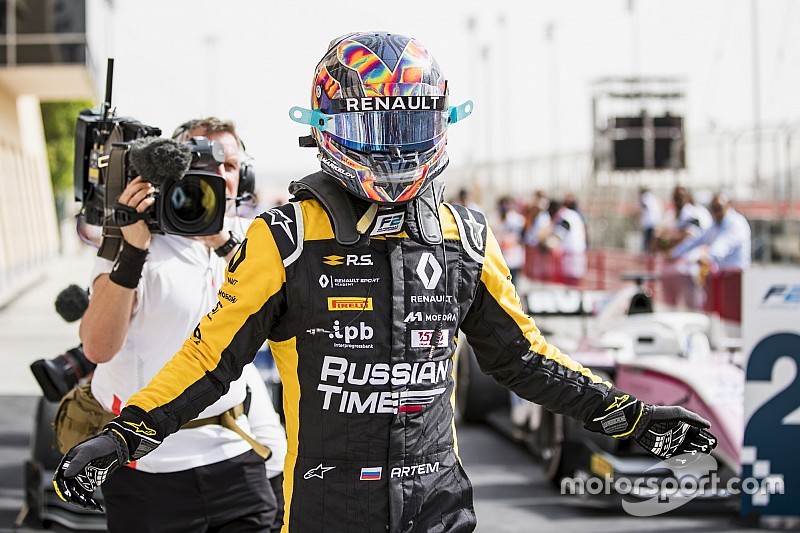 Renault Formula 1 development driver Artem Markelov admits he feared a heavy defeat in the battle against Formula 2's highly-rated 2018 rookies ahead of the Bahrain season opener.

Markelov, runner-up in the series in 2017, has four years of prior GP2/F2 experience under his belt – but all of those have been in the GP2/11 car, which made way for the series' new Dallara F2 2018 machine this year.

The Russian admitted he was worried heading into 2018, and qualifying only 17th in Bahrain would've done little to alleviate his concerns – but he then recovered from a pitlane start to finish third in the opening race, before winning the reverse-grid sprint.

“To be honest, I really feared that – like, here I am, fifth-year driver, already a veteran, should be doing well, and now the rookies will come in and I'll get trounced,” Markelov told Motorsport.com.

“By F2 standards I'm already an old fart, of course, but I gave them all a fight.

“Now there's a lot more confidence than there was prior to the start of the weekend. Before that I was doubting, worrying, that all the new guys will arrive and thrash me.”

Markelov said he didn't have a good feel for the new car heading into Bahrain, before it all finally came together in race trim.

“The car's new, too, and I was struggling to get used to it, plus there were frequent issues.” he said. “The car became heavier, which concerned me, both in testing and in practice prior to the race.

“Because it's like you're steering a boat. The old car was a bit smaller and had about as much power as this one. So it was a bit more manoeuvrable – you fly into a corner, get it turned around and head right out.

“Now it's all very slow and smooth. Like it's in slow motion.

“And I couldn't adapt to this 'boat'. But everything changed in the race – my opinion, my feelings in the car, and my feelings towards the car, too.”

The front row in qualifying was locked out by rookies Lando Norris and George Russell, reserve drivers for McLaren and Mercedes respectively.

But while Norris dominated the first race from pole and left Bahrain leading nearest rival Markelov by nine points, Russell's weekend unravelled from qualifying onwards – as he finished only fifth in the first race and stalled badly in the sprint.

Asked to comment on the two rookies, Markelov said: “Russell does everything by the book. He does what he was told to do, has no freedom.

“If [on Saturday] he had a bit more of a killer instinct, maybe he wouldn't have finished where he did – he could have been higher up.

“You have to have your own opinion during a race. He was told to conserve tyres, and he drove around conserving them.

“Lando's always been strong in qualifying, in his previous series. He started first and drove away. I don't have any particular insight about him. They [the TV] didn't show him.”

Race starts "like a gamble" with new F2 car