New F2 car should have been delayed - Markelov 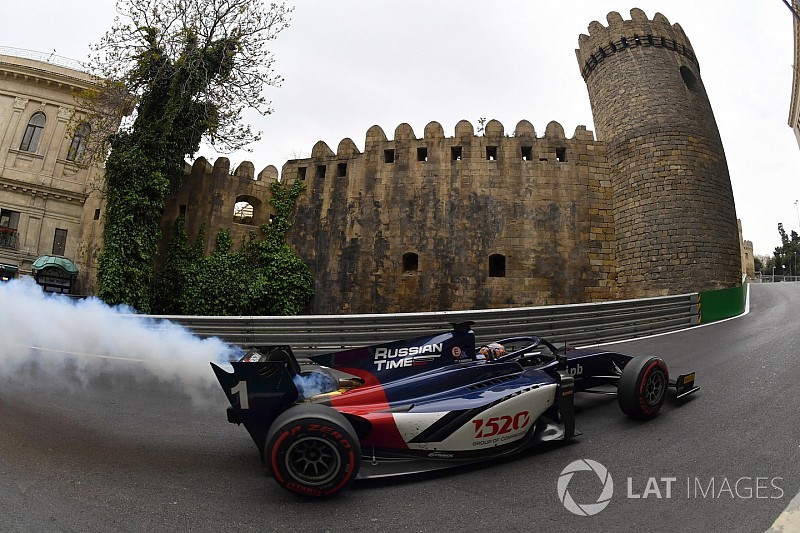 Formula 2 frontrunner Artem Markelov has hit out at the Formula 1 feeder series for not having spent more time ironing out the issues with its new-for-2018 car.

Drivers stalling on the grid en masse has emerged as the main talking point from the first races with the new Dallara F2 2018, but Markelov's Baku weekend was hampered by an entirely different problem.

The Renault F1 development retired from the first race in Azerbaijan with smoke billowing out of his car, and then pulled up in the sprint when his engine lost power.

Speaking to media after the second race, he pointed the finger at engine supplier Mecachrome, claiming also that "the power dropped 40 percent" for his Russian Time teammate Tadasuke Makino.

"We're hoping that Mecachrome can fix the engine that failed in two races, and hoping that they'll do something to move forward, rather than move backwards, which is what they've done this year," Markelov said.

The Russian, who is in his fifth year of F2/GP2 and finished runner-up last year, added that the equipment-related concerns that have come to dominate the start of the season were "making us [F2] into Formula 1".

He also insisted that reliability problems from the car's initial testing should've served as a tip-off.

"I said it in the beginning of the year, that the car would be struggling this year, and that there was no escaping it," he said.

"And instead of testing it for another year and only then approving it for racing, to avoid any problems, they ran it a couple of times and decided 'yeah, it's race-ready, everything will be fine'.

"The 17 burnt engines from testing weren't enough, they must want more, so... what's there to say?"

DAMS driver Alex Albon, in his second year in the series, said he understood Markelov's frustration but backed F2 and Mecachrome to get to the bottom of the current issues.

He told Motorsport.com: "We just want it to be pure racing. It is single-make so there's no competition in terms of engine manufacturers or cars, we just want everything to run smoothly and the quickest guy wins each race.

"At the minute, it's more about who's on top of reliability most, for someone like Artem it's completely out of his control. It must suck for him, to be honest.

"It's a shame, it's the last thing any of us want in the paddock is for the championship to be decided on failures."

Albon: Mixing it with F1 juniors could open doors