F1 race director Michael Masi has explained why marshals took so long to attend Luca Ghiotto’s car after it caught fire in the Formula 2 crash at Sochi on Sunday. 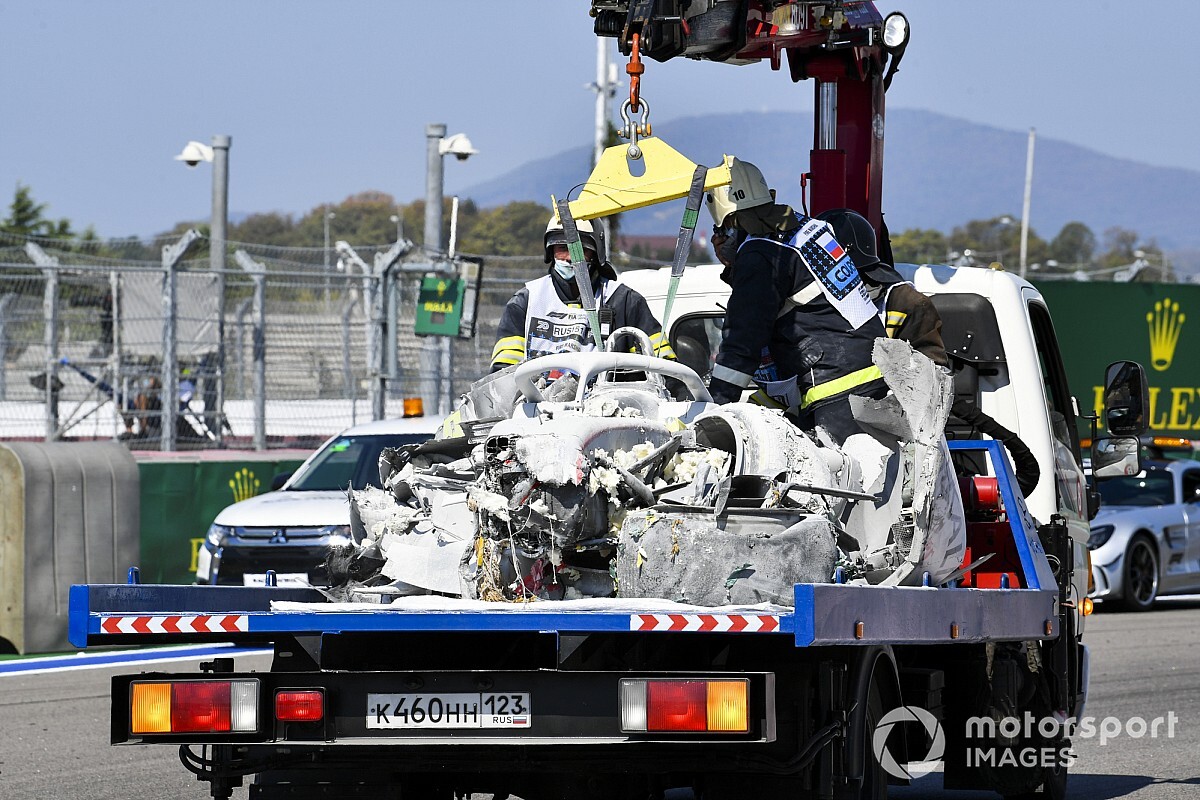 In the F2 sprint race, Ghiotto was battling with Jack Aitken for fourth position on lap seven, when as the result of a puncture the Campos driver slid into the path of Ghiotto at Turn 3. This sent both cars straight into the barriers at high speed.

TV footage revealed that there was already smoke emerging from Ghiotto’s Hitech when he climbed out of the car without outside assistance, and no fire marshals had got on the scene before it burst into flames.

The fire was eventually extinguished with the help of several marshals, but the car was pretty much destroyed in the blaze.

Masi, who visited the crash site to assess damage to the barriers, explained the circumstances behind what had appeared to be a slow response to the accident.

"They got there actually, relatively quickly, the challenge was that it was quite a distance between two marshal posts where the incident occurred,” Masi said.

“So the fireman obviously were at marshal posts that were both on the side of the incident. I wouldn't want to be running with a fire extinguisher for the best part of 150-odd metres or whatever.

“As soon as the race was suspended, and all of the competition cars have gone past, we also saw marshals from the opposite side of the track cross.

“I think that in the circumstances, yes, seeing a fire is never good. But the positive part was that both drivers got out unscathed, which is the most important element of all."

Both right tyres on Aitken's car were detached from the wheel rims in his collision with Ghiotto, which meant he hit the barriers on the exit of Turn 3 at a speed of 195km/h.

This arose suspicious that new 18-inch tyres that Pirelli has introduced in F2 could be more vulnerable in incidents than their smaller 13-inch predecessors.

Masi said he would hold a dialogue with Pirelli before reaching any conclusions about the safety of the new tyre size.

"I haven't had a look at the incident in detail to be quite honest, because obviously the main focus was the safety of the drivers, which was prime,” said Masi.

“And then subsequent to that was the repair of the affected area. But from an FIA perspective, we always look into elements like that. And we'll come together with Pirelli and will do so accordingly after this weekend as we do with any large incident."

The race control suspended action almost immediately after the collision between Ghiotto and Aitken, and eventually decided not to resume the race, with results declared at the end of lap five.

Masi said it was the right decision to not resume the race as it took marshals 90 minutes to conduct extensive repairs to the barriers.

"I think it's unfortunate, but at the end of the day, we have a timetable to adhere to for starters.

“And secondly, you know, the degree of that incident and the repair that needed to take place, I think in the end took in the vicinity of 90 minutes to do that repair.

“So, I think what happened whilst unfortunate that the FIA Formula Two championship didn't get to complete its race. It does happen occasionally."