Schumacher: I must "work on myself" to be ready for F1

Mick Schumacher says he must still "work on myself" to be fully prepared for a step up to Formula 1, after securing his first F2 race victory last weekend at the Hungaroring.

The Prema driver held off Nobuharu Matsushita in Sunday's reverse-grid sprint race to take his first win in the F1 feeder category at a track where his father Michael took four grand prix wins.

Schumacher had his first taste of F1 machinery earlier this year at Bahrain, where he spent a day each driving for Ferrari and Alfa Romeo, and has been linked to an eventual graduation to the highest level with the latter squad, given his Ferrari ties.

However, the German was keen after his Hungary win to underline that he still feels he has more to do before he would be fully prepared for a move to F1.

"I think only time can tell," said Schumacher when he thinks he could be ready to move up to F1. "Having the first victory in F2 is a great thing; still I need to work a lot on myself.

"Whether I go to F1 next year or in two years, or maybe in three years, I don't know. As I said, only time can tell that. I will do my best possible, try to learn as much as possible for when I do the step to be ready and be able to feel comfortable in whatever team I go to."

Schumacher's victory promotes him to 11th in the points standings with four rounds to go, and the 20-year-old said his victory helped to make up for a difficult two previous rounds.

"I think it's true that the first one is the hardest, but obviously once you get that win it gives you a lot of confidence to go to the next rounds," said Schumacher.

"We're getting to the end of the season now, it's good we have done it and I think in a way it's not easy because we had a lot of pressure over the whole season.

"We had some very strong performances but not enough points. I refer back to Red Bull Ring or Silverstone, where the pace was great but we didn't manage to exploit it. I'm just happy to get the win but also to get the points." 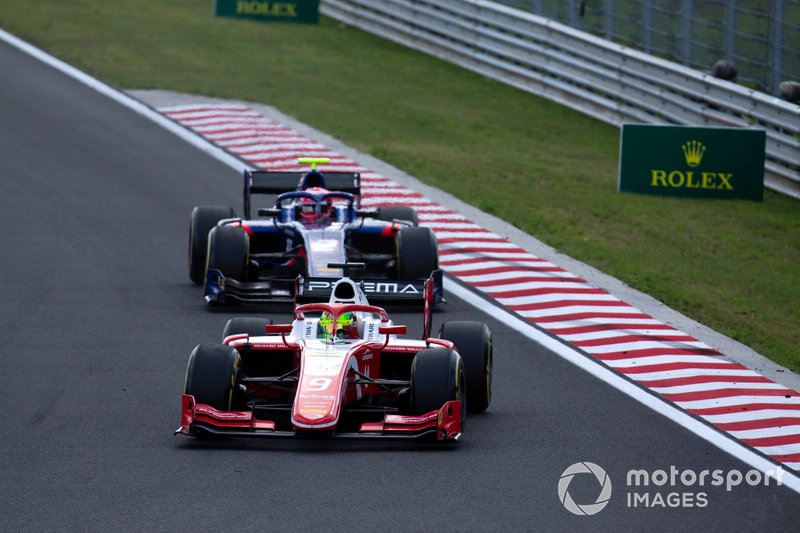 Pourchaire reveals ‘crazy’ plan that helped him race at Silverstone

Pourchaire reveals ‘crazy’ plan that helped him race at Silverstone