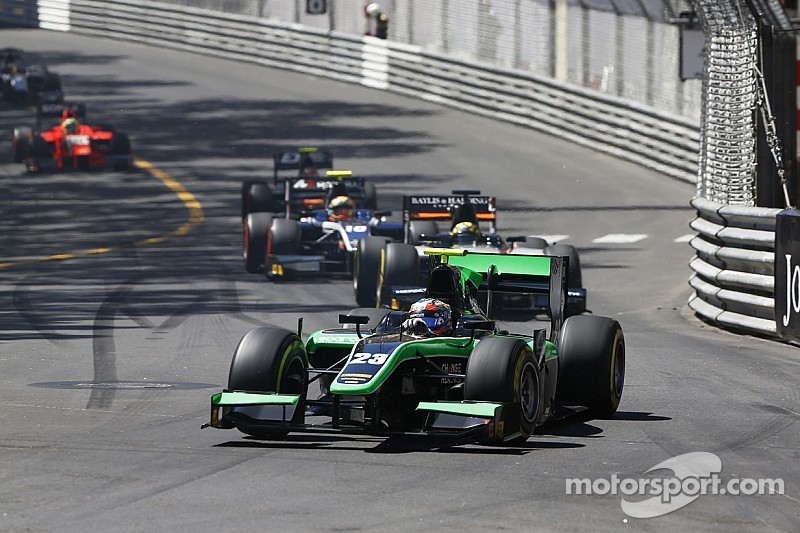 Richie Stanaway won his maiden GP2 race at Monaco for series newcomer Status Grand Prix, which had only scored one point before this weekend.

The virtual safety car was required after a collision at Loews, Rio Haryanto left in the wall after a very unwise three-abreast attempt at one of the tightest corners in the world, for which Norman Nato was given a 10s penalty.

Moments before, Amberg lost his front wing on the run up the hill to Massenet after he was pushed sideways by Johnny Cecotto Jr into the barrier.

The race went green on lap two, Stanaway pulling away from Marciello, Sirotkin, Leal, Canamasas, Pic, Rossi (who crashed into the back of Pic at the first corner) and yesterday’s winner Vandoorne.

Canamasas pulled another superb overtaking move at Ste Devote on Leal for fourth place, just as he had managed the day before on Pic. Beyond that, the race order at the front remained static throughout.

Stanaway outpaced his pursuers with ease, winning by 2s, with Sirotkin staying close to Marciello but never quite close enough to try a move.

The only worrying moment for Stanaway came at the very last corner, when he lit up the rear tyres and slid perilously close to the wall in celebration.

Behind them, there was one battle – for fastest lap. This was won by Vandoorne, who once again outscored Rossi, despite finishing behind him.

The big incident of the race was Jordan King going over the back of Pierre Gasly at the Nouvelle Chicane. King had complained that Gasly straightlined the chicane on the previous lap, but the second moment between them put King out of the race.

“I’m a bit winded,” admitted King when asked if he was OK.