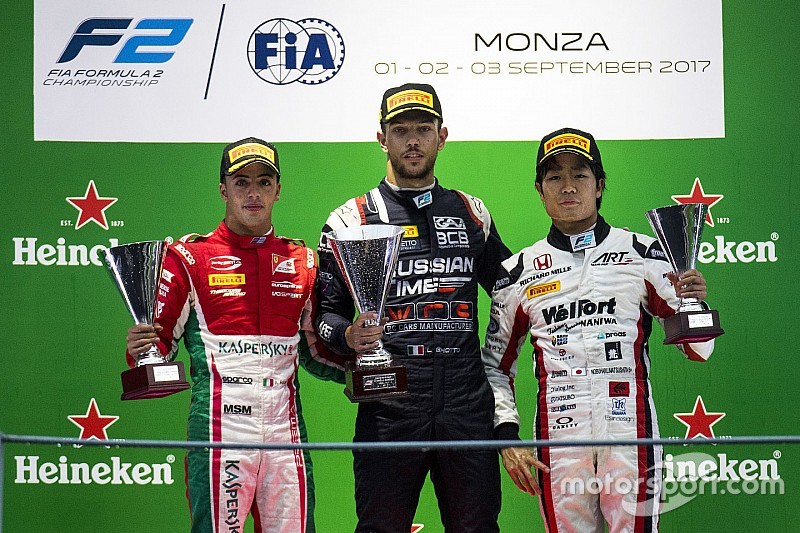 Luca Ghiotto triumphed in a chaotic Formula 2 feature race at Monza ahead of Antonio Fuoco, as long-time leaders Nyck de Vries and Charles Leclerc collided on the final lap.

Leclerc and de Vries came together while exiting the first chicane after a late-race safety car phase, which was caused by Oliver Rowland retiring when a wheel fell off his DAMS-run car.

Pole-sitter Nobuharu Matsushita completed the podium ahead of Nicholas Latifi.

At the start, de Vries leapt off the line to seize first place from Matsushita.

The top three, including Artem Markelov, who dived to the inside of de Vries and clattered into him at the apex of Turn 1, scampered across the run-off area as Leclerc, who had burst up the order with a rapid start, emerged from the chicane in fourth place.

That became third for the Prema Racing driver when Roberto Merhi, Markelov and Alexander Albon clashed at the Roggia chicane, which caused the latter to spin, and Leclerc then attacked and passed Matsushita on the run out of the Parabolica.

That left de Vries with a 2.7s lead, which Leclerc chipped away at throughout the early stages.

Behind the top two, Rowland had surged up from 13th on the grid to sixth by the end of the first lap and he then engaged in a thrilling battle over fourth place with former F1 driver Merhi.

The Rapax driver survived an early attack from Rowland at the Rettifilo by cutting the chicane – a move he repeated at the Roggia one tour later.

Rowland finally got by when he had a better run out of Turn 2 a few laps later and he quickly hunted down and passed Matsushita for third.

The race then settled down with Leclerc stalking de Vries, and Rowland lighting up the timing screens in an effort to cut the gap to the leaders.

The frontrunners waited until Lap 17 to pit to avoid rejoining in traffic, with Leclerc coming in first for fresh wets. However, he was still behind de Vries when the McLaren junior made his own stop one lap later.

But the race then changed dramatically when Rowland, who had pitted moments after de Vries, lost a wheel on the approach to the first Lesmo and stopped on the inside of the track, bringing out the safety car.

After a two-lap interruption, de Vries led the pack back to racing speeds under intense pressure from Leclerc, who took the escape road at Turn 1.

De Vries was attacked by Ghiotto going through Curve Grande and the Italian seized the lead as Leclerc let them both back past.

But at the start of the final lap, as Ghiotto cut the Rettifilo completely, and Leclerc and de Vries collided as the former attempted to go around the outside on the approach to Turn 3.

The championship leader was sent into the barriers on the outside of the right-hander, but carried on to the flag, as de Vries tumbled down the order with a puncture.

Ghiotto therefore took his first win of 2017 by 1.9s over Fuoco, Matsushita and Latifi with Albon finishing fifth ahead of Sean Gelael, Sergio Sette Camara, Deletraz and Gustav Malja.

Markelov rounded out the top 10.