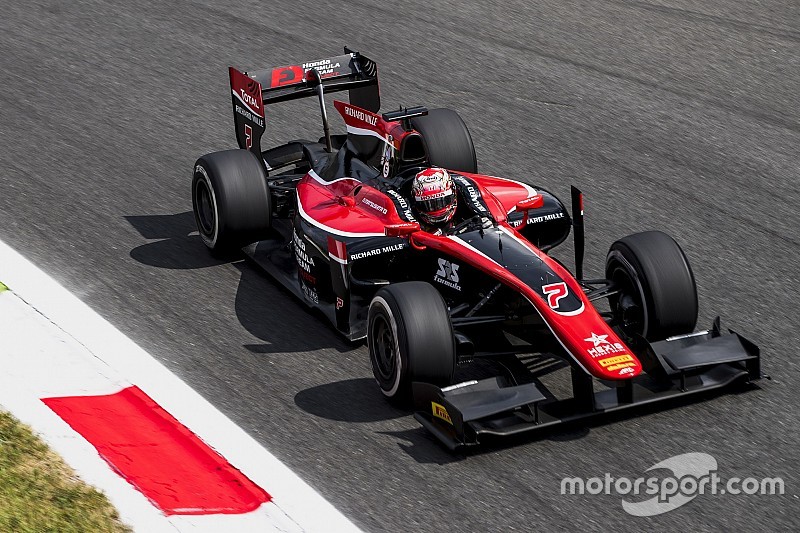 McLaren-Honda Formula 1 junior Nobuharu Matsushita became the first driver other than Charles Leclerc to top a Formula 2 qualifying so far in 2017 as he went fastest at Monza.

Championship leader Leclerc could only manage seventh place in his Prema-run car, with his title rival Oliver Rowland down in 13th for DAMS.

Matsushita moved to the top of the timesheets early on in the 30-minute session, demoting early pacesetters Alexander Albon and Leclerc with a 1m30.982s, which would stay as the day’s quickest time.

The Japanese racer, who had what he described as the “biggest crash of my life” last time out in Belgium, was the only driver to dip below the 1m31s barrier.

Leclerc locked up under braking for the Roggia chicane, jinking right as he did so and briefly putting his front-right wheel on the grass, and he abandoned his first attempt to improve his time.

But try as he might, the Ferrari F1 junior found himself behind de Vries, Deletraz and practice pacesetter Artem Markelov during the mid-session break.

Shortly after the pack re-joined the fray, Trident’s Nabil Jeffri spun exiting the Rettifilo chicane and could not get going again, which brought out the first red flag of the session.

After a short delay, the drivers jostled for position before making one final effort on the soft Pirelli rubber.

After taking two laps to warm up tyres – a tactic used throughout the field – Leclerc put in his last flyer, but could not improve.

He put all four wheels over the white line at the exit of the Parabolica as he surged to the line and was audibly frustrated on the radio afterwards.

Only a few drivers – notably ex-F1 driver Roberto Merhi and Jordan King – improved their positions heading towards the end of the session, which was brought to a premature end when Santino Ferrucci stopped his car on the approach to the first Lesmo corner when his rear suspension failed.

That left Matsushita on pole, with de Vries just 0.089s behind for Racing Engineering.

Markelov stayed fourth behind Deletraz, with Merhi and King slotting in fifth and sixth.

Leclerc was stranded in seventh – the first time he has not topped qualifying all season, although he was stripped of pole in Hungary – ahead of his teammate Antonio Fuoco.

Ferrucci and Albon rounded out the top 10, ahead of Luca Ghiotto and Spa sprint race winner Sergio Sette Camara.

Rowland clattered over the kerbs at the Rettifilo early in the session – briefly getting airborne at the second apex – and complained of “the worst car I’ve driven” as he struggled with understeer around the Monza circuit.