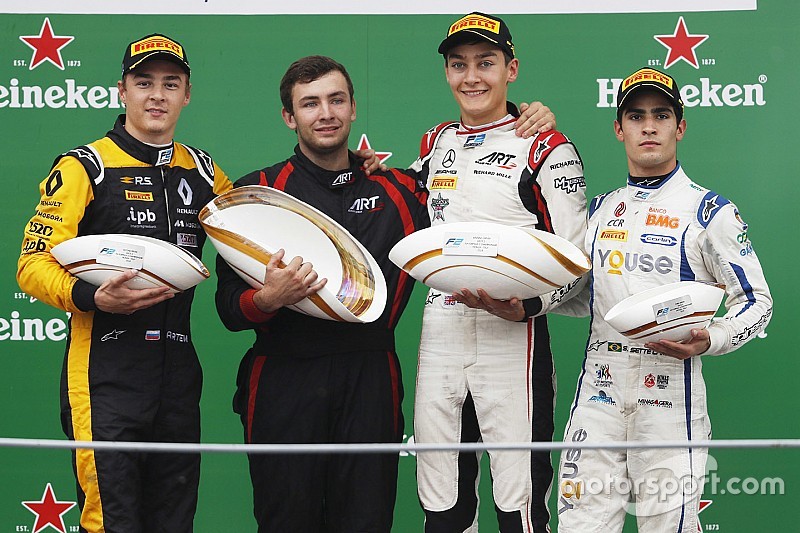 Mercedes F1 junior George Russell took his fifth win of the 2018 Formula 2 season in the sprint race at Monza, benefitting from Artem Markelov losing the lead due to a mistake.

As Ralph Boschung and Sergio Sette Camara both had poor starts from the front row, Nicholas Latifi and Russell jumped into first and second off the line from fourth and fifth on the grid respectively.

Latifi led but Russell was soon all over him, and the points leader breezed past the DAMS driver on the main straight in the fifth lap - only to then miss the first chicane.

His mistake not only allowed Latifi through but also Markelov, who had gained four positions at the start.

The Russian managed to extend his lead to over one second and thus was out of DRS range as second place changed hands behind him, but Markelov made an unforced error at Turn 1, gifting the lead to Russell.

Markelov pressured for a handful of laps before the latter managed to build a gap, the Briton completing the rest of the race untroubled and winning by one second.

Sette Camara also passed Latifi and was close to Markelov, making a desperate but unsuccessful move on the final lap, but eventually settled for third.

Latifi held on to fourth, closely followed by Lando Norris, who lost out at the start as he dropped from third to ninth and could only recover to fifth.

The McLaren junior is now further nine points behind Russell in the standings, the gap between the pair now up to 22.

Luca Ghiotto was sixth ahead of Dorian Boccolacci who, in his only second F2 round, scored his first points in seventh, having started 18th.

The top 10 was completed by Renault junior Jack Aitken, Haas protege Arjun Maini and Ferrari's Antonio Fuoco, who was set to start the race from pole before he was disqualified from race one and was relegated to the back of the grid.

Ralph Boschung hit Sean Gelael while braking into the second chicane, resulting in the retirement of both drivers.

Outside title contenders Alex Albon and Nyck de Vries both hit trouble - the former spent the first half of the race fourth but had to retire with a gear selection problem, while the latter had a puncture after contact with Roy Nissany while fighting to enter the top 10 from a pitlane start.

Feature race winner Tadasuke Makino only took 14th as he had to pit following a massive lock-up at Turn 1. Maximilian Gunther also changed his front wing at the end of the first lap.