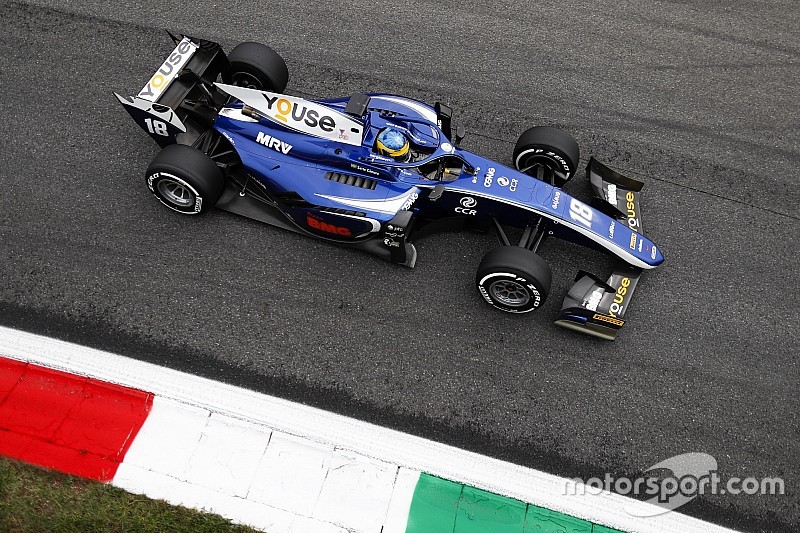 The track was ready for dry tyres with just over a quarter of the 40-minute session to go, after the morning thunderstorm had drenched the circuit. The previous Formula 1 session helped to shift some of the standing water.

Some of the leading title contenders remained in the pits with medium tyres equipped at the start, with the track still wet.

But with just under 30 minutes to go, the likes of Russell and Norris elected to switch to wets and get some running under their belts.

However, with more cars on track, the surface dried quickly and most runners returned to the track on medium tyres with 10 minutes to go.

Artem Markelov, recently linked to a Williams F1 drive, had just improved the benchmark when the Russian Time driver lost the rear end at Turn 1, and was perched atop the curb on the inside. He later got going.

That made for five different teams in as many cars at the top of the order.

Nyck de Vries, winner of the last two feature races with Prema Racing, ran slowly out of the pits with 12 minutes to go and was forced to cruise back to pitlane - where he spent the remainder of the session while mechanics worked frantically on his car.

Norris waved his hand in fury on two separate occasions as two of his flying laps were ruined by traffic.

He almost ploughed into the back of Jack Aitken, as he and Russell tried to avoid Nicholas Latifi’s DAMS-run car at the Parabolica with just under five minutes to go.

He then encountered more traffic on the next lap exiting the Ascari chicane and raised his hand in frustration.

Russell improved on his last run to take seventh, despite also suffering with traffic, while Norris took ninth.

Russell heads Norris by five points at the top of the standings entering the weekend.

Charouz Racing System driver Louis Deletraz made the most of early wet and dry running, taking the most laps with 18.