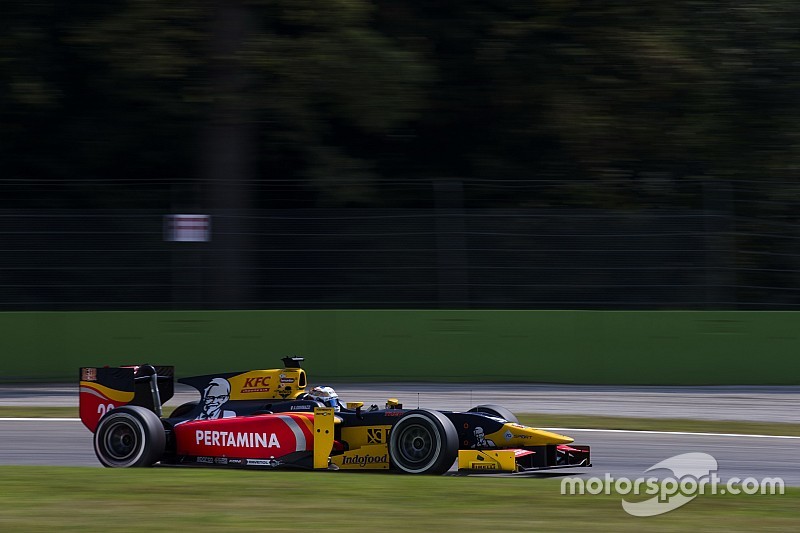 Antonio Giovinazzi took a masterful victory from the last row of the grid in the GP2 feature race at Monza after benefitting from a well-timed safety car.

Despite taking second in yesterday's qualifying, Giovinazzi was excluded due to low tyre pressure and was forced to start 21st.

One of the few to take the start on mediums, the Prema driver suddenly found himself in third after a well-timed safety car phase and then made two overtakes to claim victory.

At the start, Pierre Gasly had a much better getaway than Artem Markelov off the line, the Russian also coming under pressure from Arthur Pic, who was on the outside of him.

Markelov braked too deep and slightly nudged the left-rear of Gasly but the duo carried on untroubled.

His manoeuvre forced Pic to cut the chicane and rejoin ahead of Markelov.

Although Pic put pressure on Gasly in the first couple of laps, it was eventually the Rapax driver who lost a position to Markelov.

Pic fought back and went past Markelov next time around at the first chicane and, with both drivers running wide, the Frenchman kept the place.

Markelov was also passed by Norman Nato, who was now up to third despite running only sixth on Lap 1.

Having seemingly lost focus, Markelov made a further two mistakes shortly afterwards and was demoted by Jordan King as well.

At the front, Gasly opened up an advantage of three seconds and his situation got even better when second-placed Pic received a five-second time penalty for gaining advantage off track.

The gap was over four seconds when Pic pitted with Gasly following him a lap later.

The Red Bull junior rejoined as the provisional leader, ahead of not Pic but Nato and Sergio Canamasas.

Luca Ghiotto passed both Pic and Canamasas, with the former soon also putting pressure on the latter.

After a poor exit from the second chicane from the Spaniard, Pic managed to get alongside at the first Lesmo corner, which resulted in the duo making contact and Canamasas rolling.

Both drivers walked away from the incident, which triggered the safety car.

All drivers, who started on softs has pitted at this point, with only five drivers on mediums yet to stop.

Two of those, Nobuharu Matsushita and Philo Paz Armand went in immediately, with the other three, Raffaele Marciello, Gustav Malja and Giovinazzi, pitting a lap later.

Confusion followed as Gasly lined up first behind the safety car, which missed the aforementioned trio, who were supposed to head the field.

Following a couple of laps, the field was finally told to pass the safety car, allowing Marciello, Malja and Giovinazzi to take the top three.

Marciello kept the lead after the restart with Malja having to focus on the attacking Giovinazzi.

After closely following him for a couple of laps, Giovinazzi made a DRS move past Malja for second.

He was then immediately all over Marciello and made the same move on the final lap to take a victory on home soil.

Marciello settled for second ahead of Malja, who kept Gasly at bay.

Nato held off Ghiotto for fifth, followed by King and Mitch Evans, who will start from the pole position in the Sprint Race.

The top 10 was completed by Oliver Rowland and Markelov.

Despite running fourth after the start, Sergey Sirotkin only finished 15th.

Giovinazzi, Jeffri excluded from qualifying due to tyre pressures