Nobuharu Matsushita says he isn't ready to give up on his Formula 1 dream, even if there is only a "one percent" chance he can still graduate to the category with Honda's support.

Despite losing his Carlin Formula 2 drive to Honda protege Yuki Tsunoda for 2020, Matsushita was able to secure a seat at MP Motorsport to contest his fifth season at GP2/F2 level.

Like last year, which he finished sixth overall, he goes into the season needing a top-four championship finish in order to earn a superlicence that would open up the possibility of racing in F1 for either of the two Honda-powered teams on the grid.

“I’m ready [for a step up to F1]," Matsushita told Motorsport.com during a visit to MP's factory just outside Rotterdam. "I just need a ticket.

"What I have to do is very clear and simple: to do a good job and ideally get the title, or at least the superlicence. I don’t want to say it, but then it’s kind of out of my control. The timing must be right as all the other things. But the least I can do is the job in F2.

"Since I was four I dream about F1. And now Honda is doing F1, this is also a chance for Japanese drivers, because without Honda it’s kind of difficult for us. But now we have Honda and I’m a Honda driver. And if there’s a one percent chance, I would like to try it.”

Matsushita added that he can draw inspiration from Honda's own difficulties returning to F1 as an engine builder with McLaren in 2015-17, before its present alliance with Red Bull began that has allowed it to emerge as a race-winning force once again.

"In the beginning Honda was a bit struggling when they were with McLaren," he said. "It was a difficult time for Honda. A lot of people were saying the Honda engine was not competitive or something like that.

"But they never gave up and now they are winning races. And it’s kind of the same for me. I never give up. And this year is going to be a really important year for Honda as well, I think.

Why Matsushita chose to join MP

Matsushita isn't aiming just for the bare minimum needed to keep his F1 hopes alive, believing that a title assault is within the realms of possibility despite MP's minnow status.

"Top-four is the minimum, minimum target," the Japanese driver said. "But I’m not here to become fourth or fifth in the championship. I would like to fight for the win."

Last year Jordan King (pictured below) became only the second driver in MP's history to finish inside the top 10 of the GP2/F2 standings, Oliver Rowland having been the first to do so in 2016. Its last win came back in 2017 with Sergio Sette Camara.

A genuine belief in MP's potential to rise up the grid helps explain why Matsushita chose to join the Dutch squad even when he had offers from rival teams.

“I think the team made a step forward this winter as they restructured some things," he explained. "I feel the team trust me and they believe in me here. 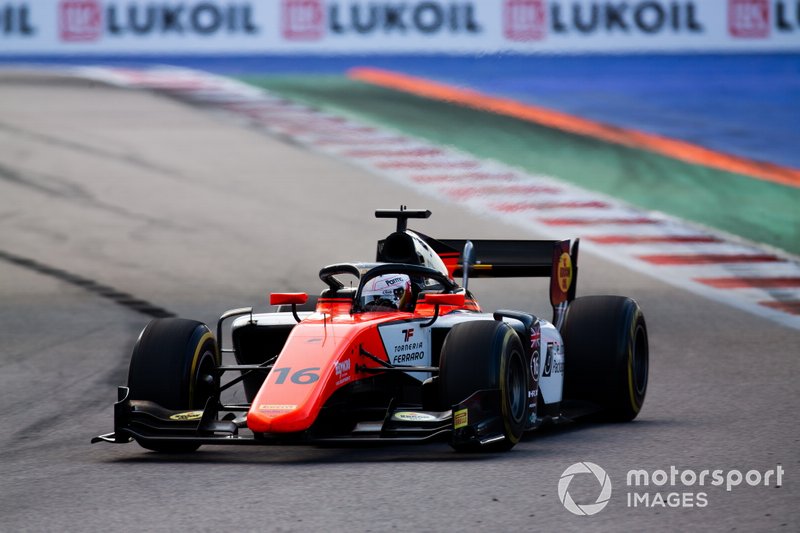 "Also I will work with the same engineer I worked with last season at Carlin [Daniele Rossi], as he moved here. I have a really good relationship with him and we work very well together.

"We have the confidence that we can fight for the championship. So it’s a great opportunity they have given me here, so that’s why [I chose MP]."

He added: "Another target I have for myself is also to have the consistency through the races. I didn’t manage to do this last year because I made a couple of mistakes and also I had a few mechanical failures, at the beginning of the season especially.

"Without these it could have been very good. I performed quite well with Carlin so I hope this year at MP it will be even better and I can challenge for the title.”

In December, Matsushita had appeared set to race in both Super Formula and SUPER GT as an official Honda driver once it become clear he wouldn't keep his Carlin F2 seat, even testing for Drago Corse in the post-season Super Formula rookie test at Suzuka.

But the 26-year-old opted to turn down those opportunities, preferring to race on the international stage regardless of whether he can ultimately graduate to F1.

“For sure it was kind of a big decision for me," Matsushita said of the decision. “Obviously my dream is F1 for the moment. But also, I would like to be an international driver, so not only drive in Japanese championships.

"So ideally I would like to be in something like IndyCar or Formula E, something international you know, so I can fight with other world-class drivers.

"Obviously Super Formula and SUPER GT are amazing championships and really high-level. But they only race in Japan and almost all the drivers are Japanese. So for me it’s more attractive to race in Europe. That’s why I made this decision as well.”

Should the F1 dream not come to fruition, Matsushita expressed an interest in taking over from Takuma Sato as Honda's main representative in IndyCar when the 2017 Indy 500 winner - now 43 years old - opts to call time on his career.

This is a role that Honda's current number one driver on the domestic scene, Naoki Yamamoto, has already ruled out filling as he feels that oval racing is too dangerous.

Matsushita said: "Obviously my first and biggest goal is to reach F1, but IndyCar would also be attractive for me as it’s a big international championship.

“I know him [Sato] very well. He’s kind of our teacher. He’s in America, so we don’t meet each other a lot. But at the end of each year we do Thanks Day at Motegi [a special fan event organised by Honda] and every time he’s there and I am there.