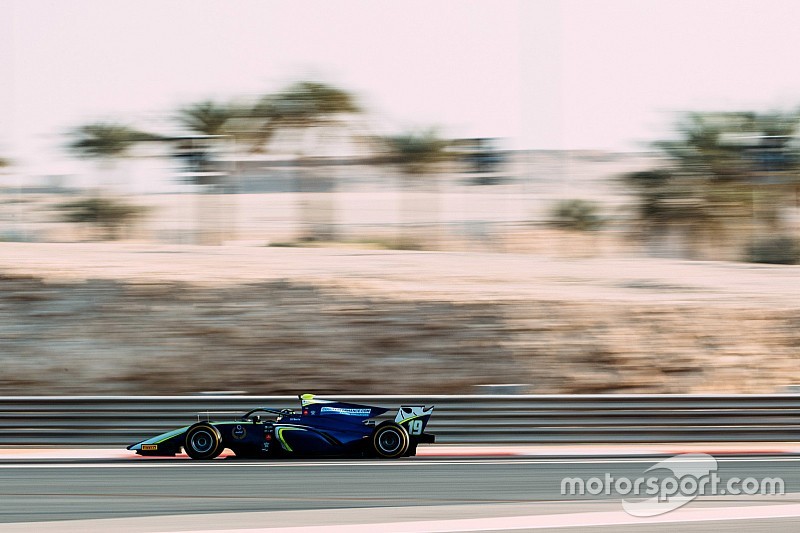 Lando Norris dominated the season-opening Formula 2 race to lead a Carlin 1-2 in Bahrain, as Artem Markelov stormed from the pitlane to the podium.

McLaren F1 reserve Norris controlled the 31-lap race from pole position and was unchallenged up front, as teammate Sergio Sette Camara prevailed in a thrilling scrap with the charging Markelov.

Norris surged clear of his opponents off the line to leave himself untroubled into Turn 1, as Sette Camara sliced through slow-starting rivals to grab second, from sixth on the grid.

Norris pulled 2.4 seconds on Sette Camara by the end of the opening lap, though the Brazilian's grip on second weakened as Prema's Nyck de Vries snatched the spot into Turn 1.

Norris continued to hammer out an advantage – as much as a second per lap – as de Vries came under pressure from Sette Camara, the Carlin driver eventually recapturing second place.

The leading group all ran the Prime/Option tyre strategy and duly made their stops midway through the race, with Norris retaining a sizeable advantage despite a slow left-rear change and complaints of an engine glitch.

Sette Camara was undercut by erstwhile front-row starter George Russell but quickly dispatched the ART racer as focus switched to Markelov, who rose through the field after a technical problem at the conclusion of the formation lap relegated him to the pit lane.

Markelov emerged into the top 10 within five laps and from there picked off rivals with a sequence of sublime passes, as he put his vast experience in the series to good use.

Markelov honed in on Sette Camara across the final couple of laps and the pair ran side-by-side along the pit straight as they jostled for second.

Markelov held the inside line but Sette Camara boldly jinked back under braking to reclaim the position, securing a 1-2 for Carlin upon its return to the championship, with Norris' post-pitstop complaints of an engine issue coming to nought.

Alexander Albon recovered from a low-key start to grab fourth position, having occasionally grappled with an ill-performing DRS, with reigning GP3 champion Russell the best-placed debutant in fifth.

Russell's prospects of converting his front-row start into a podium were thwarted by suffering wheelspin off the line, while he also complained of top-speed struggles later in the race.

De Vries lost ground across the pit phase, accentuated by a wide moment, but recovered ground to take sixth place, ahead of Prema teammate Sean Gelael, who rose from 19th on the grid.

Arden's Maximilian Gunther took eighth place – and with it sprint race pole – on his debut, as Jack Aitken and Ralph Boschung rounded out the top 10.

2017 F2 race winners Nicholas Latifi and Luca Ghiotto took only 11th and 12th, the Campos driver hampered by a drive-through penalty for colliding with Tadasuke Makino at Turn 1.

Louis Deletraz was a contender for points early on but regressed to 13th across the closing laps, while Trident was the only team to run the alternative Option/Prime strategy, but to no avail, with Santino Ferrucci 14th and practice pacesetter Arjun Maini 15th after a front-jack failure in the pits.

Ex-F1 driver Roberto Merhi caused an additional formation lap when his MP Motorsport machine failed on the grid, and the Spaniard pithily radioed in to confirm "the car is f***ed", and he went no further.