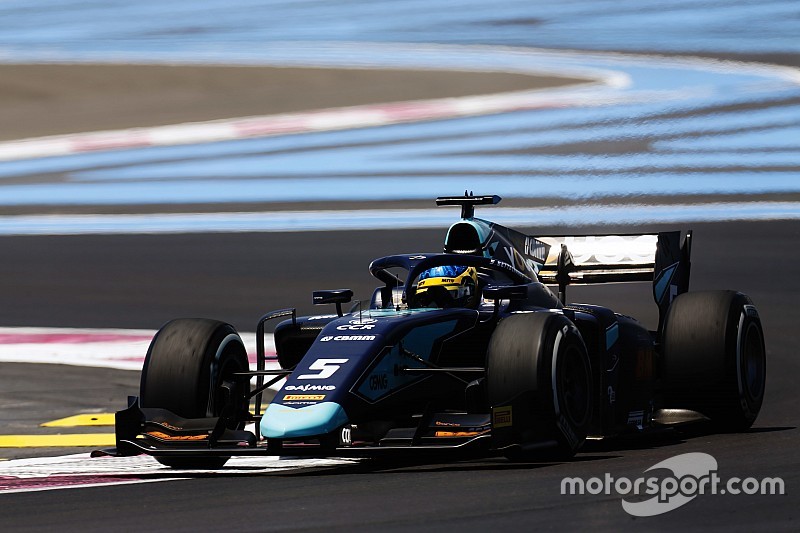 DAMS driver Sette Camara, who had topped practice, was fastest after the first pair of flying laps in qualifying, 0.459s clear of F2 form man Nyck de Vries of ART Grand Prix.
De Vries improved his lap and had one more attempt to beat Sette Camara’s time, but a late red flag hindered drivers improving. Ralph Boschung had stopped at the exit of Turn 4, reporting that he had lost power.

With just 2m59s on the clock as the drivers left the pits, that left time for one flying lap only.

De Vries struggled to improve and had to settle for fourth, as F2 rookie Guan Yu Zhou snatched second place at the death.

The Virtuosi Racing driver, top newcomer in the points standings in fifth, jumped to second with his last effort for a best result in an F2 qualifying session, while a qualifying-best first sector helped Jack Aitken to slot in third ahead of de Vries.

Sette Camara spun on his final attempt, being pushed off the road and expressing desperation, only to be told shortly after he had pole on the radio as his eventual pole margin was just over three tenths.

Callum Ilott’s strong form continued with fifth, as he just didn’t have enough left in the tyres to improve on his last attempt.

He did best points leader Nicholas Latifi, the DAMS driver taking sixth, having started the day in the Williams Formula 1 car for FP1.

Aitken’s Campos Racing teammate Dorian Boccolacci scored ninth on the grid for his home race, while the second Prema-run car of Sean Gelael rounded out the top 10.

Chaos had ensued at the beginning of the session, a red flag coming out less than three minutes in. First Trident Racing’s Giuliano Alesi clashed with Carlin’s Louis Deletraz, the contact breaking Alesi’s front right suspension and wing while Deletraz lost the majority of his rear wing. Both blamed each other for the incident.

After the red flag, Nikita Mazepin’s ART Grand Prix-run car began to exhume blue smoke with a suspected engine failure as it reached the pits.

The Carlin mechanics got Deletraz back out to join the fray, and he set a session-best first sector before the red flag for Boschung’s stricken Trident. He had to settle for 12th, one spot behind title contender Luca Ghiotto.

Anthoine Hubert’s Arden-prepared car was the last to hit issues, pulling off at Turn 1, with the team struggling for set-up this weekend. He starts 15th while teammate Tatiana Calderon is 17th.

Alesi penalised for hitting Deletraz on qualifying out lap