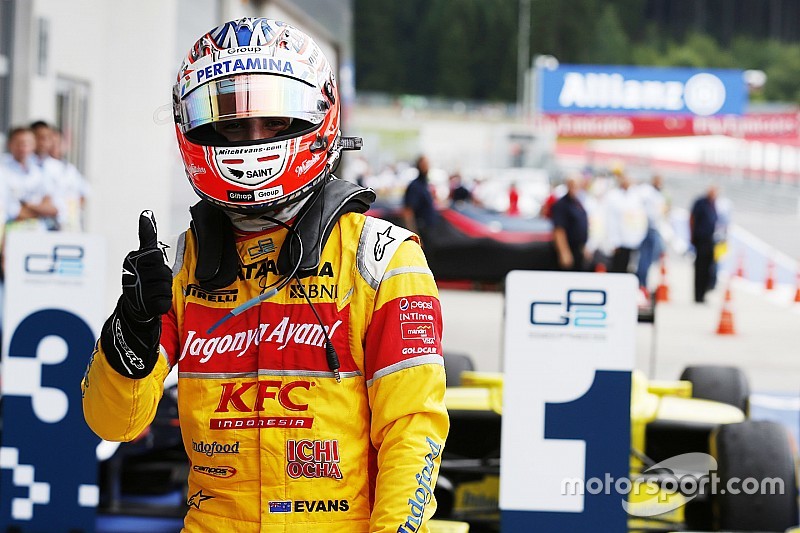 Mitch Evans took his first GP2 win for Campos Racing in a chaotic mixed conditions Red Bull Ring showdown, having made up for starting 10th on the grid with a correct strategy.

Evans headed home a Campos 1-2 as teammate Sean Gelael likewise profited from an early call to take the mandatory stop, before rain arrived and threw the race into complete pandemonium.

Having beaten Antonio Giovinazzi to pole by just 0.006s, Sergey Sirotkin gave up the spot immediately at the start, suffering a slow getaway as both Prema cars went past him.

The Russian tried to retaliate, running side-by-side with Pierre Gasly on the straight into Remus, but the Red Bull junior held position.

From that point onwards, the Prema duo began to gap the rest of the field, but Gasly was not content running in formation and made his move on lap six.

The Frenchman dived down the inside of Giovinazzi into Turn 1 and kept his teammate behind through Turns 2 and 3, securing his lead.

He went on to quickly establish a safe gap, controlling the race - only for rain to throw a spanner in the works.

The skies opened up in sector one, making the track very wet in some corners and completely dry everywhere else - and finally, Gasly was caught out, burying his car into the gravel at Schlossgold, giving up not only a two-second lead but any chance of finishing the race.

The Frenchman's exit necessitated a safety car, which prompted a number of drivers mid-pack to gamble on intermediate tyres - among them Norman Nato and Alex Lynn.

Those drivers did not profit from the decision, but the likes of Evans, Gelael and Jimmy Eriksson, all having made their mandatory stops before the safety car, were now in prime position.

At the restart, Giovinazzi held the lead for a lap before going wide at Turn 1, handing the advantage to compatriot Raffaele Marciello.

Over the next few laps, almost all of the frontrunners took a trip through the run-off at Turns 1 and 2, and the lead changed hands again, Giovinazzi retaking the spot from Marciello at Schlossgold.

But the conditions then caught out Carlin driver Marvin Kirchhofer, the German spinning at Turn 2 and stalling the car to bring out the safety car.

That brought the leading group into the pits, Marciello passing Giovinazzi with a quicker pitstop, while Evans, Gelael, Philo Paz Armand and Eriksson took over in the lead.

However, when Artem Markelov smashed his GP2/11 car against the wall on pit exit after a slow stop, the safety car was replaced with a red flag - and brief confusion occurred as Armand, yet to stop, passed a number of cars and the safety car itself on entry to pitlane.

After a lengthy red-flag stoppage, the race restarted under safety car, which was supposed to last just one lap before green flags. That did not happen - as both Binder and Giovinazzi stalled while restarting.

The Italian got going again, only to stop for good at pitlane exit, blocking the path for the few cars that remained behind.

When that particular situation was cleared, Evans finally led the field at the green flag, checking out from teammate Gelael.

Behind, Marciello worked his way past Eriksson thanks to fresher rubber, before quickly dealing with Armand - who then came in to serve a penalty for having passed the safety car.

But Marciello's charge would go no further than that as his pace on the softer option dropped off, allowing Evans and Gelael to calmly bring home a 1-2.

The Italian took third, just ahead of compatriot Luca Ghiotto and Eriksson, who had been passed by Oliver Rowland but retook the position later on.

Nato and Sergey Sirotkin made up the top eight and will be tomorrow's reverse-grid front row.

Gustav Malja ended up ninth - despite early contact with Sergio Canamasas that saw the Spaniard collect Nabil Jeffri and exit the race - while Jordan King made up the top 10.