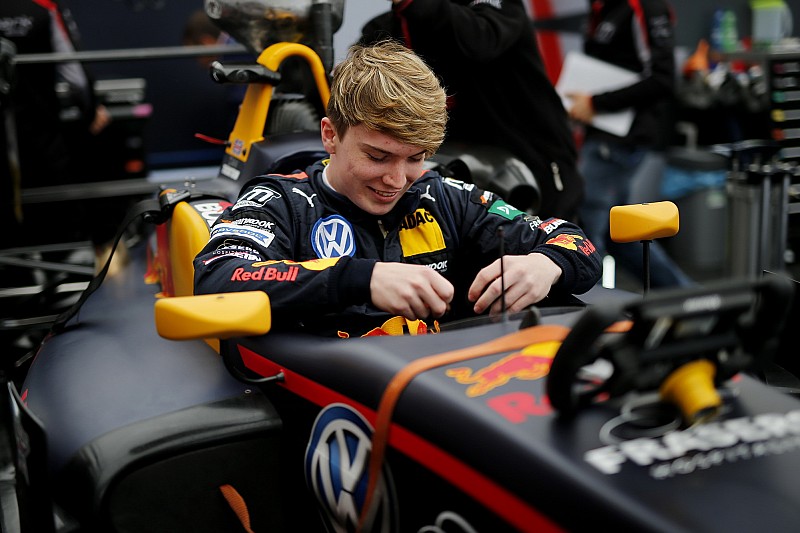 Red Bull says its Formula 1 protege Dan Ticktum will not replace the banned Santino Ferrucci at Trident Racing in Formula 2, despite intense rumours within the paddock.

Ticktum has been earmarked as a possible replacement for Brendon Hartley at Toro Rosso next season, but even if he wins the European F3 Championship he is competing in this year with Motopark, he won't earn enough superlicence points to enter F1.

A retrospective change to the superlicence would be needed to grant Ticktum enough points for F1, and even a mid-season F2 drive wouldn't provide enough points to catapult him into the Red Bull junior team at Toro Rosso.

Ferrucci is banned for the Hungary and Spa rounds of F2 after crashing into his teammate Arjun Maini on the cool down lap after the Silverstone sprint race, and was dropped by Trident earlier this week.

On seeing this, reigning McLaren Autosport BRDC Award winner and Macau Grand Prix victor Ticktum believed that he may eventually be placed in F2.

"I haven't heard anything about it from Red Bull," Ticktum told Motorsport.com. "As soon as I saw Ferrucci wouldn't be at Trident any more, it came to mind that I could do a few races.

"But we'll see. There's been nothing from Red Bull. If Helmut [Marko, Red Bull motorsports advisor] wants me to do it, he'll just phone me up and tell me to do it and I will.

"I wouldn't be nervous or worried to do it, I would enjoy doing it."

However, Marko quashed the rumours and confirmed Ticktum, 19, was expected to focus on F3.

Ticktum is 13 points off the European F3 championship lead after four rounds, taking two wins, while struggling to get his car off the line consistently.

When asked if Ticktum would race in F2 this season, Marko said: "No. He now has to deliver constant performances in F3.

"He will make the step to F1 only if he delivers a mature performance first."