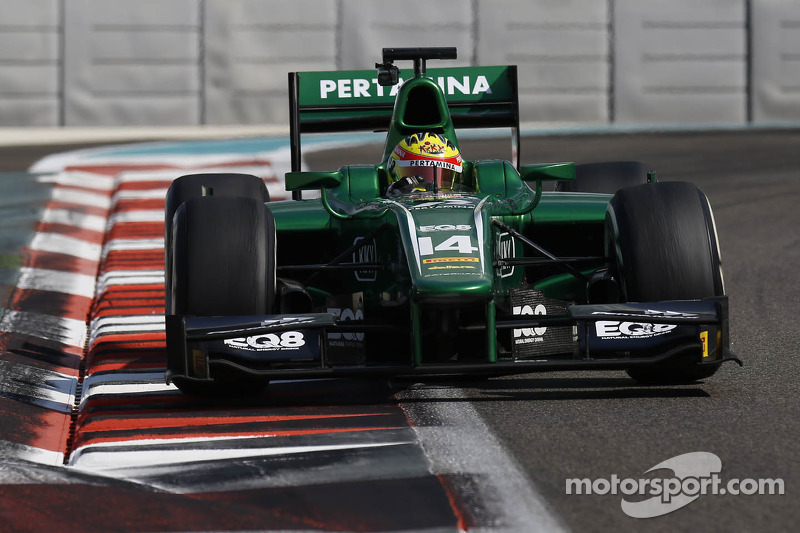 Rio Haryanto topped the second day of post season testing at the Yas Marina Circuit. The Indonesian who switched to EQ8 Caterham Racing today set a laptime of 1:49.203 this evening. In the morning session, it was FIA Formula 3 European Champion Raffaele Marciello who led the way.

When the pitlane opened this morning, Stoffel Vandoorne (ART) was quick to set the early pace ahead of Rio Haryanto, the Indonesian driver having moved to Caterham for the day. Thirty minutes into the session however, it was Jolyon Palmer who topped the timesheet in 1:50.556 with the DAMS car. The Briton remained the fastest man on track until the final hour when Marciello broke under the 1m50s barrier with a laptime of 1:49.964. In the closing stages of the session, the Trident man found some extra pace and improved his personal best by four tenths. Julian Leal who switched to Arden today also dipped under 1m50s but remained four tenths slower than Marciello. At the Chequered flag, behind the pair of Marciello and Leal, Haryanto, Stéphane Richelmi, Jazeman Jaafar (Carlin), GP3 graduate Tio Ellinas (MP Motorsport), Hilmer’s Daniel Abt and Rene Binder, and Andre Negrao (Racing Engineering) completed the top ten.

When the second session of the day opened at night-time, Haryanto was quick to set the pace in 1:50.141, but it was Vandoorne who first dipped under 1m50s. The Belgian’s time was bettered then by Will Stevens (Caterham) with Johnny Cecotto (Lazarus) a shy one thousandth slower. The session was red flagged after Arthur Pic stopped his ART car on track. When the proceedings resumed, Haryanto found some extra pace to set a laptime of 1:49.203 which was never beaten. The final thirty minutes of the session saw Palmer surge to P2 ahead of Marciello and Vandoorne. Ellinas, Daniel Abt (Hilmer), Stevens, Cecotto, Negrao and Binder completed the top ten.

Tomorrow’s final day will see some more changes in the entry list starting with Vandoorne moving to DAMS whilst Conor Daly will test at ART alongside Nikolay Martsenko. Nathanaël Berthon will join Arden with Pic whilst Marciello and Mitch Evans will join Racing Engineering for the day. Carlin will welcome Andre Negrao and Addax will test with Facu Regalia. Johnny Cecotto will switch to Rapax. Trident will have a new line up made of Giovanni Venturini and Gianmarco Raimondo. Leal will move to Hilmer. Finally, Lazarus will test Dani Clos and Binder.