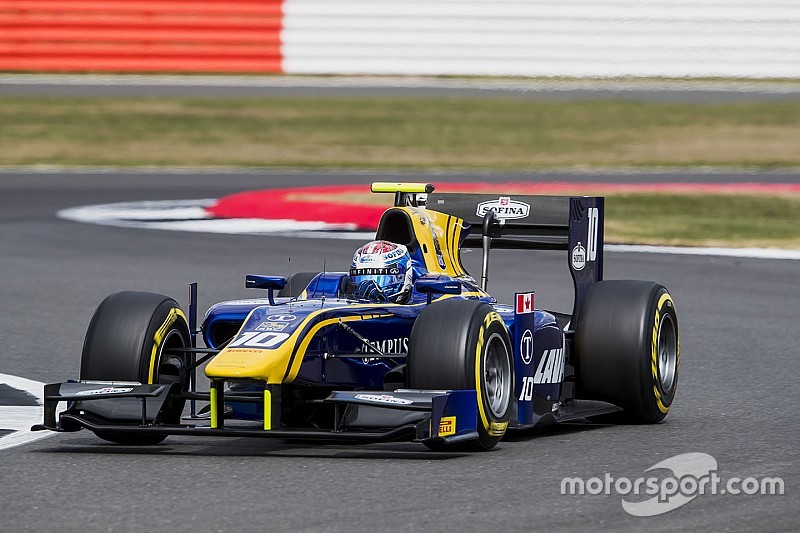 Latifi had a good launch off the line from pole and quickly established a 1.5s lead over Luca Ghiotto, who took advantage of Jordan King's sluggish getaway from second.

Oliver Rowland also passed King, and the two Brits made contact when the MP Motorsport driver tried to fight back and went alongside on the outside at Becketts.

King ran off track before retiring in the pits with damage.

Rowland continued unaffected, but Artem Markelov managed to go side-by-side with the DAMS driver on the Hangar straight, having better momentum.

However, the Russian was forced on the grass and Rowland was given a five-second time penalty.

Behind Markelov, Sergio Canamasas spent the first half of the race defending from Charles Leclerc, who started eighth after his feature race win on Saturday.

After several unsuccessful attempts, Leclerc finally forced his way through the Spaniard at the Arena section.

The Ferrari junior then quickly caught up with the trio of Ghiotto, Rowland and Markelov, who were fighting for second.

The order of the quartet was unchanged until the safety car came out in the closing stages after Ralph Boschung spun on the grass on the Hangar straight while trying to overtake Alex Albon.

The safety car reduced Latifi's five-second advantage to nothing, but the Canadian did not lose his lead on the restart and the final lap of the race.

Ghiotto secured second as Rowland, who lost his chance to score points thanks to the safety car bunching up the field, decided to hold up the rest of the field in order to "surprise some people".

However, Rowland was overtaken by Markelov on the final lap and was only classified 10th after his penalty was applied.

Canamasas fought back with a brave move on the outside of Vale to demote Leclerc and secure fourth.

Norman Nato was sixth as his Arden teammate Sean Gelael spent the majority of the race behind him, only to spin out on the safety car restart.

That promoted Nyck de Vries into seventh, the Dutchman completing an impressive recovery race from last on the grid.

UPDATE: Rowland was given a 20-second time penalty for impeding other drivers during the late-race safety car restart.