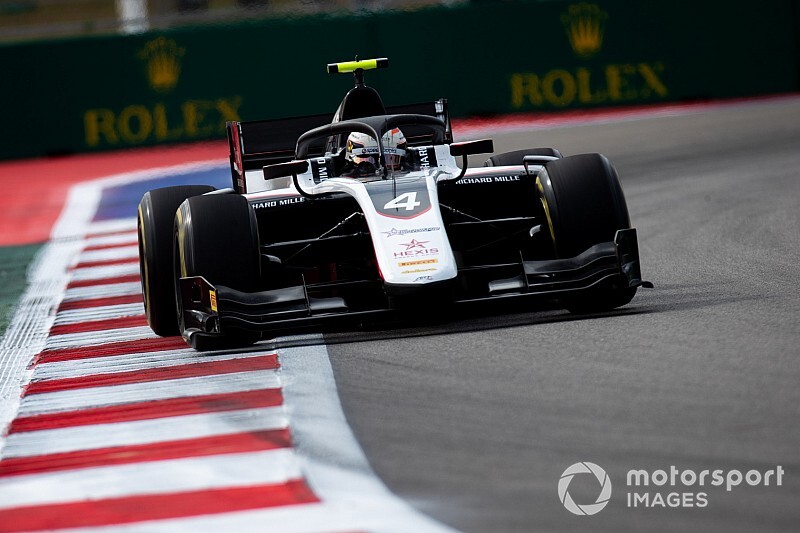 Latifi trailed de Vries by 59 points entering the weekend, but arrived hopeful at the Russian venue where he took second in the feature race to current Red Bull Formula 1 junior Alexander Albon in 2018.

Amid threat of rain, Latifi look put himself top of the pile after the first flying laps, but ART Grand Prix’s de Vries was threatening in second.

After the mid-session lull for debriefs, de Vries delivered the quickest time of 1m47.440s, two tenths clear of Latifi in second.

De Vries now only needs to outscore Latifi by seven points this weekend to secure the F2 title in the car George Russell used to win last year's championship in Abu Dhabi. Latifi is yet to score an F2 career pole.

Having snatched pole in mixed conditions last time out, Ferrari junior Callum Ilott jumped up to third late on for the Sauber Junior team, while Luca Ghiotto claimed fourth, which could prove key for the battle for third in the championship.

His teammate and Renault junior Guan Yu Zhou delivered a session best sector, but was only classified fifth overall. He headed Sette Camara (DAMS), who was shuffled back late on to sixth.

Louis Deletraz went as high as fourth for Carlin but had to settle for seventh ahead of Russian driver Nikita Mazepin – de Vries’s teammate – and Jordan King of MP Motorsport.

Honda junior Nobuharu Matsushita ran in an off-sync strategy hoping rain would arrive late in the session, but with the track remaining dry he dropped from sixth to 10th.

Jack Aitken had a scrappy session where he received front wing damage on his first flying run of the session, and his late effort was only good enough for 12th - a blow for his aspirations of moving up the championship order from fourth.

Artem Markelov, making his second appearance of the F2 season in place of the late Anthoine Hubert, took 16th, one spot ahead of the injured Juan Manuel Correa’s replacement Matevos Isaakyan, who is making his F2 debut at his home event.