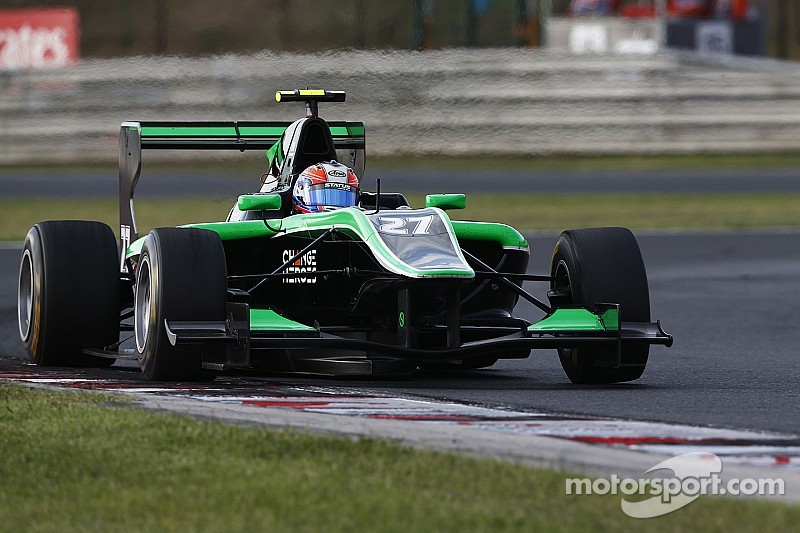 It was the day Status Grand Prix had wanted: after their one-two finish in Silverstone Race 2, the team and drivers were keen to add the big Race 1 points to their tally and they certainly did that at the Hungaroring. It was a nail-biting finale with Stanaway and Arden International’s Robert Visoiu enjoying a race long tussle which ended with the Romanian running wide and allowing Nick Yelloly to sneak into second.

Warm temperatures set the scene for Race 1 in Hungary, with Stanaway on pole with Series leader Alex Lynn alongside. The lights went out and Stanaway made a clean getaway but the Carlin and Red Bull Junior man wasn’t so lucky and lost two places at the start. Visoiu made a blazing getaway from fourth on the grid to almost steal the lead going into Turn 1, but had to brake very late to avoid getting too close to the Kiwi.

Yelloly held third ahead of Lynn and Patric Niederhauser early on. The focus for race one was a thrilling battle, a race long duel between Stanaway and Visoiu for the lead. The pair traded fastest laps early on with the margin between the two less than a second as the duo sized each other up.

As the laps ticked down, the more eager Visoiu was to take the lead of the race and he attempted several moves on the Status Grand Prix ace. Stanaway defended his best efforts as the two remained glued to each other, setting up a sensational finale.

Niederhauser lit the timing screen purple in his pursuit to pass Lynn for fourth but ran out of steam with Carlin’s Emil Bernstorff passing the Swiss driver in the final laps.

The best action was still to come with two laps remaining, Visoiu attacked and tried to out manoeuvre Stanaway but ended up running wide and lost time and more vitally, a position to Yelloly, dropping to third.

Stanaway crossed the line at the chequered flag to record his third GP3 race victory of his career with his teammate Yelloly two seconds back. Visoiu pocketed his first rostrum of the season in front of Lynn, Bernstorff, Niederhauser, Jann Mardenborough (who claimed two bonus points for fastest lap), Dino Zamparelli, Dean Stoneman and Jimmy Eriksson completing the top ten.

Lynn remains on top in the Drivers’ Standings on 126 with Stanaway up to second on 99. Eriksson, Bernstorff and Marvin Kirchhöfer complete the top five on 85, 83 and 80 respectively. In the Teams’ Standings, Carlin continues to lead on 213 with Status Grand Prix rising to second on 173 and ART Grand Prix in third on 129.

Zamparelli will start tomorrow’s GP3 Race 2 from reverse pole – the race action kicks off at 09.25 am.

Vandoorne flies to victory in Budapest