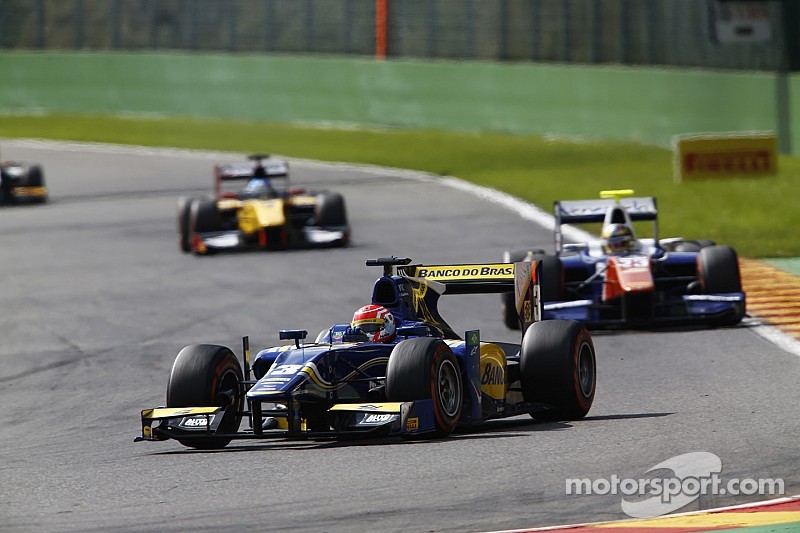 Jolyon Palmer’s consistency is still unparalleled in 2014 but Felipe Nasr managed to reduce the gap.

With only three rounds left in the 2014 GP2 Series season, the race to the crown has intensified between front runners Jolyon Palmer and Felipe Nasr. The Brazilian managed to reduce the gap to the Series leader to 32 points which gives him some extra boost and confidence for the final leg of the year. However, Palmer’s consistency is still unparalleled in 2014 having scored in every single round so far.

Both drivers may be busy looking ahead, but they’d also be wise to look into their rear mirrors as Stoffel Vandoorne and Johnny Cecotto are also having great comebacks: the rookie from ART has been pretty stellar since Silverstone, stepping on the podium six times and adding a second win to his tally at Spa two weeks ago.

It will be an emotional weekend for me: I live really close to Monza.

As for the Venezuelan from Trident, he put his experience to good use in Belgium to finish on the rostrum twice, bouncing back from a difficult race weekend in Hungary. The paddock set up camp in Italy this weekend for the ninth round of the season at Autodromo di Monza where driving skills are put to the test. It is one of the fastest events on the calendar with low downforce.

It will be up to the teams to try and find the right compromise in the car set-up. Pirelli have nominated the P Zero Orange Hard and P Zero White Medium compounds for the high- energy demands on the tyres caused by fast corners, long straights and heavy braking.

Two new faces will join the grid: Red Bull Junior Team driver Pierre Gasly will debut in GP2 at the wheel of the #19 Caterham Racing car whilst Italian Sergio Campana will drive for Venezuela GP Lazarus on car #25.

Pirelli’s racing manager Mario Isola says: “As the GP2 Series begin to draw to a close this year, the competition becomes even closer, with tyre strategy and management able to make a crucial difference. We’ve gone for the same nomination as Spa, as these circuits place some of the biggest demands on tyres that we see all year in GP2.

We expect strategy to play the same key role as it has always done this year, with the teams using pit stop tactics to boost track position: especially if they have qualified further down the grid than expected. Ambient temperatures should be more stable in Italy than in Belgium, but there is still the possibility of rain.

Finally, we are proud to welcome everyone from both series to our home race, which is always a very important occasion for us.”

“I am really happy to be racing at Monza this week, not only because it is my home track, but also because it’s a very fast track with low downforce. It’s where you get the maximum top speed of the season. It’s a very technical layout – the driver can make a difference. The Ascari chicane is very nice and fast with low downforce, it is a very difficult one.

The last corner, the Parabolica with the new tarmac will be easier now because you know that if you make a mistake, it is not as costly as it used to be. So, you can push harder and go to the limit. I think, it will be more comfortable. “There are a lot of overtaking spots like after the first chicane, or after the second one, and before Ascari or before Parabolica.

Regarding tyre management, because there’s not a lot of fast corners, it will not be as difficult as some other tracks like Barcelona. “It will be an emotional weekend for me: I live really close to Monza. It will be special. If I win, it will be the same points as any other victories, but because my friends will come to see the race, it will be quite special.”

• Red Bull driver Pierre Gasly joins   Caterham Racing for the final three rounds of the 2014 season. The Frenchman becomes the youngest driver of the GP2 grid.

• Sergio Campana returns to GP2 in replacement of Conor Daly in car #25. The   Italian driver previously raced in 2 races last season with Trident.

• Jolyon Palmer has still managed to score in every single race this season and has not finished lower than 7th (Monaco Sprint   Race).

• Felipe Nasr has finished on the podium in all rounds bar the first one in Bahrain. He has also scored the most wins so far: 4 in total.

Is GP2 still fit for purpose?

Pic sets the pace in Monza