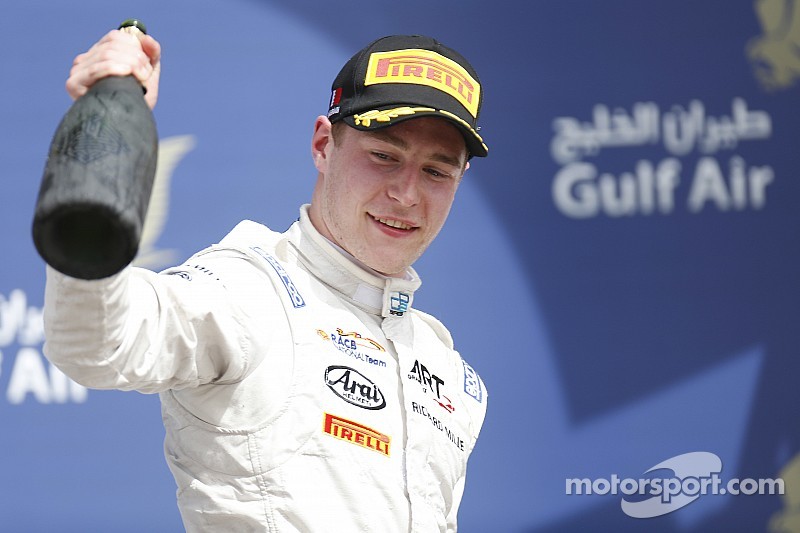 Stoffel Vandoorne drove a brilliant race to win the opening round of the GP2 Series at Bahrain, overcoming a tyre strategy deficiency to charge to victory from 10th position with 10 laps remaining.

Poleman Vandoorne had led from the start, but his decision to start on the medium-compound tyre almost undid his chances.

A multiple pile-up on lap four totally changed the complexion of the race. Raffaele Marciello attacked Norman Nato for fourth, using DRS to get close at Turn 1. As they battled through Turn 4, Arthur Pic jumped both of them.

Nato continued to defend hard, changing his line in the braking zone for Turn 7 as Marciello lunged him, which caused him to clip Pic into a spin. Pic then collected Marciello and Pierre Gasly as he spun back across the track, putting three cars out on the spot, while Marciello limped back to the pits to retire.

The safety car was required to clear up the mess, and this effectively gave the soft-tyred starters a free pitstop to move to the medium-compound tyre. But this was very early in the race, and they were always going to struggle for grip at the end.

Alexander Rossi grabbed the lead of the 'race within a race', jumping ahead of Alex Lynn during the stops.

Rossi had crucially passed Racing Engineering teammate Jordan King on the opening lap, as King – who had outqualified Rossi – was forced to stack in the pitlane behind the American which caused him to tumble down the order to 17th.

Vandoorne set a sequence of fastest laps on his mediums, as he need to pull out the gap of a pitstop to give him a chance of staying in touch with the leaders after his later pitstop.

Lynn hit Rossi at Turn 1 at the restart, fortunate to escape serious front wing damage. Rossi then did a great job in traffic, putting a trio of slower hard-tyre starting runners between him and Lynn, who soon had Mitch Evans attacking him. Evans passed Lynn on lap 18 at Turn 1.

Vandoorne pitted from the lead on lap 22, rejoining in 10th place after a delay on the right-rear corner.

Rossi inherited a 6.7s lead over Evans – who had started down in 13th after a disastrous qualifying – who then got into a huge battle with King.

Vandoorne was over 20s behind Rossi, but his opening lap on fresh soft tyres was 5s per lap faster, and flew up to the cars who were much slower on well-used mediums.

He carved through them, and with five laps to he was up to third, 12.5s behind Rossi. He passed King with ease to hunt down Rossi for the win.

The gap was 9s with four laps to go, with Vandoorne lapping 3s per lap faster in clear air as Rossi struggled on his tyres. Vandoorne passed Rossi with just over a lap remaining, as Rossi ran wide at the first hairpin.

Rio Haryanto overtook King for third in the closing stages, and then passed Rossi for second too. King finished fourth, ahead of Robert Visoiu.

Lynn tumbled down the order to 19th, complaining that he "couldn't keep control of the car any more".