A big weekend is upon GP3 Series at Sochi Autodrom 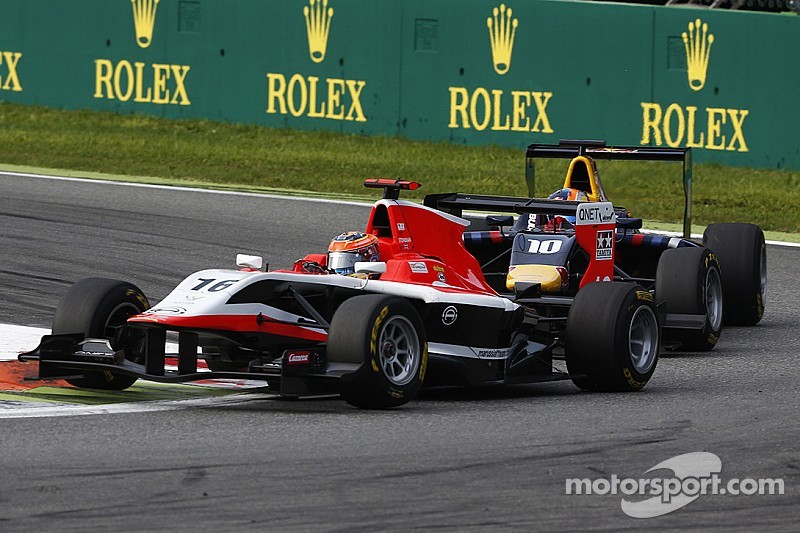 A brand new venue for the GP3 drivers to contest.

The Series along with the F1 and GP2 fraternity make their maiden voyage to Russia. The GP3 drivers’ and team’ title could be decided at the Sochi Autodrom at the penultimate round of the 2014 season.

The 5.848 km street circuit features 18 corners and a mix of high speed corners with technical sections. Last time out GP3 raced at the historic Monza circuit with Koiranen GP’s Jimmy Eriksson converting pole into a race 1 victory after returning to form after suffering misfortune in the previous rounds.

Sunday saw a remarkable tussle between Dean Stoneman and Alex Lynn which delivered an epic encounter: Stoneman proved triumphant but it was Lynn who grabbed one hand on the champion’s trophy with a 50 point advantage over his nearest rival Richie Stanaway.

A fifth GP3 driver can be crowned champion in Sochi

The Status Grand Prix ace pocketed just two points in a disastrous weekend for the Kiwi. Carlin and Red Bull Junior star Lynn could wrap up the title this weekend and succeed current F1 Scuderia Toro Rosso pro Daniil Kvyat. A driver can score a maximum number of 48 points in one round, therefore depending on results – a fifth GP3 driver can be crowned champion here in Sochi.

Lynn leads the way as he has done since the opening round, now on 173 compared to Stanaway on 123. Eriksson, Emil Bernstorff, Marvin Kirchhöfer, Nick Yelloly and Zamparelli are also hot on their tails and could still stake a claim in the title fight. Carlin remains on top in the Teams’ Standings with an impressive 290 points, whilst ART Grand Prix and Status Grand Prix are separated by just three points in second and third.

“We expect the asphalt to be not particularly abrasive as this is a semi-permanent street circuit, although we’ve not actually had an asphalt sample to assess – so this will be the biggest unknown factor. While the GP3 teams have simulators, the free practice time is extremely limited, so this will be a big test for the drivers – as they will have to understand the lines quickly and get the most out of the car before qualifying. Tyre management is sure to be an important fact, as Turn 3 takes a lot of energy out of the tyres, even though the overall tyre energy demand of the track is not so high.”

“I’ve been preparing for this brand new track by going to Base Performance in Banbury, UK. I use the sim there and I can learn a track on average in 6-7 laps. But I usually spend around 3-4 hours on the sim preparing. The majority of the tracks this year have been new for me so to be honest this is a regular routine for me to learn a new circuit: it’s nice to be in an equal position to my competitors and I hope this will help leap me ahead of my rivals. I’m expecting the track to be very smooth, fast and flowing. The track walk will be important to see how high you can run on the kerbs, whether there are sausage kerbs etc. The 45 minute Free Practice session will be vital to maximise learning the circuit and getting the right-set up for the weekend. ”

• The best rookie is Alex Lynn (Carlin) who leads the Series on 173 points.

• Marussia Manor Racing will not participate in this event.

• There are several driver changes this weekend: Dean Stoneman replaces Carmen Jordá in the #7 Koiranen GP car, Russian rookie Nikolay Martsenko will drive the #17 Hilmer Motorsport instead of Sebastian Balthasar and Patrick Kujala replaces John Bryant-Meisner in the #24 Trident machine.