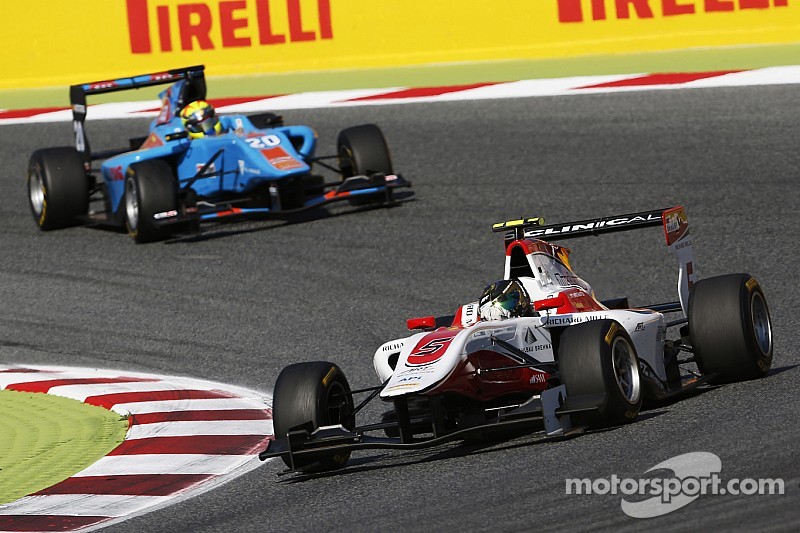 ART Grand Prix’s Marvin Kirchhofer scored victory in the second round of the GP3 Series at Barcelona in Spain on Sunday morning.

Starting from reversed-grid pole, Trident’s Antonio Fuoco led into Turn 1 ahead of the fast-starting Kirchhofer.

Behind them, Jimmy Eriksson made a poor start and braked late to make up for it. Although he straightlined Turn 1, he emerged in third, ahead of Emil Bernstorff, Kevin Ceccon and yesterday’s star tyre-preserver Jann Mardenborough.

Fuoco then ran wide at Turn 3 on the opening lap, allowing Kirchhofer to gratefully grab the lead and he pulled well clear.

Eriksson snatched second from Fuoco with a fantastic attack through the opening sequence of corners on lap 2, sealing the deal by going around the outside of the Italian – on full opposite lock – at Turn 3.

Kirchhofer was already 3.6s clear up front, and Eriksson was unable to make any impact on his advantage.

The race came alive in the closing stages, as Bernstorff attacked Fuoco. Mardenborough, who passed Ceccon for fifth at Turn 1 with five laps to go, also got in on the act making it a three-car battle for third.

Mardenborough passed them both when Fuoco shoved Bernstorff wide at Turn 3 on the final lap. Meanwhile, Kirchhofer pulled away to a 6.7s victory over Eriksson, who only just held off the charging Mardenborough.

Fuoco kept Bernstorff at bay for fourth, with Ceccon sixth. Yesterday’s winner Esteban Ocon trundled around in seventh, gaining a place from Luca Ghiotto early on.