After switching from a race-winning seat at Trident to GP3 dominators ART, Beckmann was expected to challenge for the title, but is the lowest of the three ART drivers in the standings in 13th.

Ahead of the title decider, Beckmann revealed that his father was injured in a serious car accident and is currently in coma.

"At the moment it is hard for me to find any words," Beckmann wrote on Instagram. "I will not compete in the 8th round of the FIA F3 championship in Sochi because my father had an extremely serious car accident two days ago.

"He has serious head injuries and is in coma right now. I immediately flew back home and will stay near my father's bed.

"This situation at the moment takes my family and me to the very bottom, but I know my dad is a fighter and he will read this post when he wakes up. Thanks for all the messages."

ART has confirmed that the German will not be replaced at Sochi, with the team downsizing to two cars for Max Fewtrell and Christian Lundgaard. 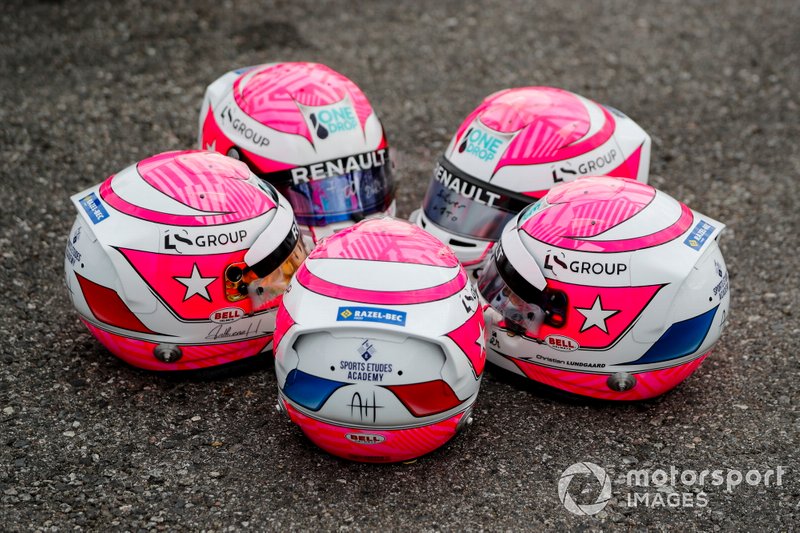 All of Renault’s Formula 1 juniors are wearing Anthoine Hubert’s helmet livery design in memory of the late French Formula 2 driver.

Arden driver Hubert passed away as a result of injuries suffered in the Spa F2 feature race on August 31, the first driver to die on an F1 weekend since Ayrton Senna in 1994.

Now all of the Renault Sport Academy are using Anthoine’s ‘star’ design, which had the red replaced for pink as he switched from his ART Grand Prix championship-winning season in GP3 to Arden, its cars carrying a pink livery.

Hubert used the design at all but the Paul Ricard race this year. where he ran a tribute to his hero Alain Prost.

Lorandi – like Hubert last year – is an affiliate of the programme, Hubert’s 2018 GP3 programme was enough for Renault to give him full junior status.

Gabriel Bortoleto topped the timesheets in the FIA Formula 3 post-season test at Jerez, setting the fastest overall lap on Thursday for Trident.

Sebastian Montoya and Emerson Fittipaldi Jr are among those confirmed to take part in the FIA Formula 3 post-season test at Jerez.

Leading from the start of the 2022 FIA Formula 3 season, Victor Martins sat a champion in waiting as a red-flagged race decided his destiny. Much like the way he was crowned, it hasn’t always been straightforward for the determined Frenchman.

Michel: "Never good to end a championship like that" after red-flagged F3 finale

FIA Formula 2 and 3 CEO Bruno Michel says it’s “never good to end a championship like that” after the title-deciding F3 race at Monza was red-flagged.