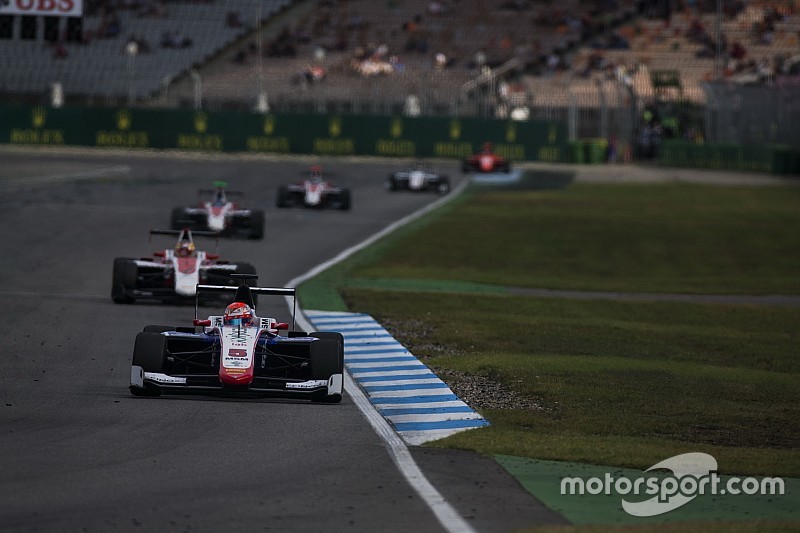 Some of GP3’s leading drivers have questioned the use of the Virtual Safety Car following a Hockenheim weekend where the system impacted the results of both races.

Both encounters at the German track were partly determined by an early VSC period, as Antonio Fuoco surged into the lead of the first race on the restart and Jake Hughes passed Arjun Maini for first place in the second race just as the VSC was deployed.

Maini gave away further positions at the end of the VSC period, eventually ending up fifth, and was particularly strident in his criticism of a system he feels isn’t fit for purpose in GP3.

“Under the VSC conditions, my car was three or four km/h down than the others,” Maini told Motorsport.com. “So Hughes passed me and [Charles] Leclerc caught me up like crazy.

“Then, at the restart there were no panels around me when it turned green, so I couldn’t see any panels and I dropped five places.

“I personally don’t like [the VSC] at all. There’s no GPS to monitor anything, and you could clearly see that people were gaining a lot – and I lost out trying to do the right thing.

“It’s twice in a row that the leaders lost out because of the VSC – they are bringing it in to not disadvantage the leader, but all it has done is make it worse. I don’t see any problems with regular safety car."

Alex Albon experienced similar frustration in the opening race of the weekend, as the Anglo-Thai dropped from first to fourth place at the VSC restart while Fuoco blasted into a lead he would never lose.

“In race one I was controlling my gap quite comfortably at the start, then obviously we had the VSC,” recalled Albon. “The engine temperature was getting a bit cold, so I had to use second gear.

“But there’s a difference in speed under VSC depending on what gear you’re in, second gear being the slowest but the one that keeps the engine up to temperature.

“So I lost my gap then, and at the restart Fuoco got a two second gap to all of us. It was a bit of a weird one, he had pretty much already passed me before the green lights came on.”

Fuoco: "We have to work with this system"

Asked by Motorsport.com about the manner by which he claimed the lead, Fuoco was defiant – suggesting that the onus should be on each driver to react to the signals as quickly as possible.

“Every time [this happens] we complain about the Virtual Safety Car, but we have these rules and we have to work with this system,” said the Italian. “Sometimes I’m lucky, sometimes someone else is luckier than me.

“We just have to watch the board. If I am behind the board and I have the board there [in front of me], I can do a better start. This is our system and we can’t do anything.”

Tatiana Calderon, who scored her first point of the season in the opening race, said that GP3 needs to consider upgrading its VSC system to the same standard as GP2, which uses GPS technology and dashboard signals.

“I’m not a big fan of the VSC, it’s not fair,” said the Colombian. “You don’t know when it’s going to go out, what time you’re close to a board or not.

“Hopefully they will improve the system if that’s possible. I think they need to step it up, and make sure we use the same system [as GP2], that would change a lot.”

Dennis set to pick between GP2 and sportscars for 2017