GP3 sets up camp at the Autodromo di Monza in Italy 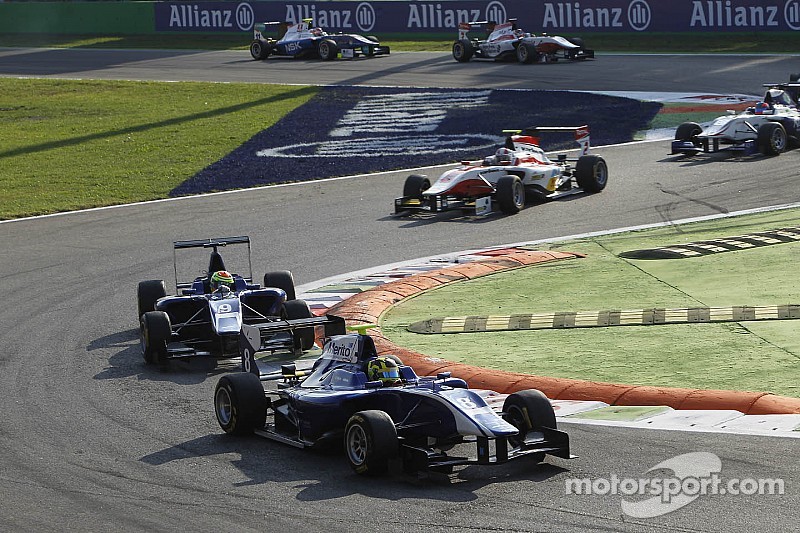 The final European race of the season is upon as GP3 sets up camp at the Autodromo di Monza in Italy. The atmosphere is always electric with the extremely passionate Tifosi with superb racing with long, fast straights providing plenty of overtaking opportunities.

Round 6 two weeks ago was run at the legendary Spa- Francorchamps and a wet qualifying session delivered a new pole-sitter: GP3 debutant Luca Ghiotto. The Italian produced Trident’s first pole position in his maiden weekend.

They have revamped the corner and I think it’s a big shame as it’s one of the most iconic corners in the world and I think they have ruined it.

Race 1 was all about strategy: the track was drying and there was a mix of drivers starting on slicks and wets. Marussia Manor Racing’s Dean Stoneman came through the pack to record his second win of the season in a thrilling race.

Race 2 saw a titanic tussle between the top two in the Series: Alex Lynn and . TheRichie Stanaway Carlin driver was triumphant in holding off the Kiwi and gained a small increase in his Series lead. 32 points separates the top two of Lynn and Stanaway with three rounds remaining (Sochi and Abu Dhabi follow Monza).

Status Grand Prix’s Nick Yelloly moves up to third in the standings ahead of Emil Bernstorff and Jimmy Eriksson. Carlin continues to head the Teams’ Standings on 248 points with Status Grand Prix and ART Grand Prix next up on 216 and 181 respectively.

This weekend there are two small changes to the line-up, Australian rookie Mitchell Gilbert returns to Trident in the #25 machine, whilst Ghiotto replaces Tereshchenko in the #23 car.

Pirelli Racing Manager Mario Isola commented:  “As the GP2 and GP3 Series begin to draw to a close this year, the competition becomes even closer, with tyre strategy and management able to make a crucial difference. We’ve gone for the same nomination as Spa, as these circuits place some of the biggest demands on tyres that we see all year in GP2 and GP3.

Despite this, the medium tyre in GP3 is still more than capable of absorbing all the forces placed on it throughout the race weekend – even though the tyre allocation is much smaller than that of both Formula One and GP2.

We expect strategy to play the same key role as it has always done this year in GP2, with the teams using pit stop tactics to boost track position: especially if they have qualified further down the grid than expected.

Ambient temperatures should be more stable in Italy than in Belgium, but there is still the possibility of rain. Finally, we are proud to welcome everyone from both series to our home race, which is always a very important occasion for us.”

“Monza for me is obviously one of my favourite tracks being an Italian driver. I always love to race here. The track is really fast and I really like the faster circuits. It’s always really fun to drive here. You think it’s easy but it’s not. There are long straights and you need to pay attention on the exit of the corners to make sure you have good speed. It’s a really good track to make overtaking moves on.

The races are always lively until the last corner of the last lap as anything can happen with the tows and slipstream you can get, like back in 2012 with Evans being crowned champion. My favourite corner is the Parabolica, but they have revamped the corner and I think it’s a big shame as it’s one of the most iconic corners in the world and I think they have ruined it. I don’t expect high degradation on the tyres. I will be pushing every lap.”

• The best rookie is Alex Lynn (Carlin) who   leads the Series on 153 points.

• There is one driver change this weekend:  Mitchell Gilbert will be back in the #25 Trident car replacing Konstantin Tereshchenko, with pole-sitter from Spa Luca Ghiotto switching from the #25 car to #23 within Trident.

Mardenborough hauls in points at Spa-Francorchamps