GP3 travelled to Budapest for Round 5 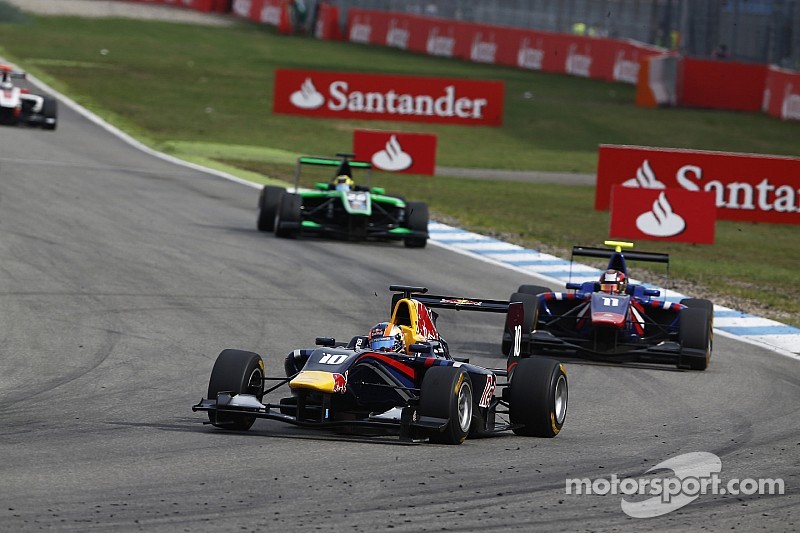 It’s as if we’ve never been away!

Following Round 4 last week in Germany, the Series have travelled the short journey across to Budapest in Hungary for Round 5 of the 2014 campaign. This is the only back-to-back event on the calendar which is always an extra challenging time for the paddock with limited time to prepare.

Hockenheim produced two new winners in some of the hottest conditions GP3 has had to contend with. Home favourite Marvin Kirchhöfer flew to his maiden pole, followed by a dominant win on home turf which saw the German rookie propel himself to third in the Drivers’ Standings.

Fellow debutant Jann Mardenborough was victorious in Race 2 achieving Arden International’s first win and podium of the season. Series leader Alex Lynn continued his impressive streak, pocketing two podiums and extending his advantage over his competitors. His nearest rival Jimmy Eriksson recovered well from a penalty issued after Silverstone to collect six points in Race 1 but lost a podium place the next day after a yellow flag infringement.

ART Grand Prix’s Kirchhöfer and Jenzer Motorsport’s Pal Varhaug will both drop five positions on the grid in Race 1 after causing separate collisions at the Hockenheimring.

There are several changes to the driver line-up this weekend, Victor Carbone will not drive for the Trident outfit – the Italian squad will run with two drivers (De Beer and Gilbert). Austrian rookie Christopher Höher replaces Adderly Fong in the #22 Jenzer Motorsport machine.

Pirelli have nominated the soft tyre for this event.

“The Hungaroring is the slowest permanent circuit that the GP3 Series™ visit all year, with high temperatures and little chance for the tyres to cool down because of the lack of straights. As overtaking is not easy, strategy will become a key element in gaining track position, as we saw in Hockenheim. Even if a driver qualifies low down the grid, with the right strategy they still have the possibility to do well. The cars tend to run maximum downforce, which means that there are a lot of forces affecting the tyres at the same time: downforce as well as lateral and longitudinal forces, which tend to be quite well-balanced over the course of the lap. Looking after the rear tyres will be particularly important, and as the track is not extensively used over the course of the year, we expect to see quite a high degree of track evolution during the weekend. While we’re definitely expecting warm temperatures, we’ve raced there with rain in the past as well.”

“It’s quite a challenging track as you have to be quite a smooth driver, it’s quite weird as if you try to push more you can end up going slower. You have to be really precise and do everything right to go fast. You need to have a really good qualifying at this track as it’s very hard to overtake. There are a lot of corners which follow each other and you only really have two chances to capitalise on: the front straight and two corners where you can overtake. It’s not easy as both of those corners you come out of a corner where it’s difficult to be close behind someone. I enjoy the two fast corners – they are fun as they are both blind and you just have to trust your instincts and go for it. For me, I like the track a lot as it’s where I have won the most races and I just like the fact there is so many corners and you have to put it all together, to make a good lap. If you make one mistake, your lap is ruined. It is challenging but I like challenges so it’s great.”

> The best rookie is Alex Lynn (Carlin) who leads the Series on 114 points.

> Marvin Kirchhöfer (ART Grand Prix) and Pål Varhaug (Jenzer Motorsport) both have a 5 place grid penalty which will be applied to Race 1 in Budapest after causing separate collisions in Hockenheim Race 2.

> There are several driver changes this weekend: Austrian rookie Christopher Höher will replace Adderly Fong in the #22 Jenzer Motorsport car whilst Trident will run with two drivers only: Roman De Beer and Mitchell Gilbert with Victor Carbone not racing this weekend.

Zamparelli sets the pace in Budapest