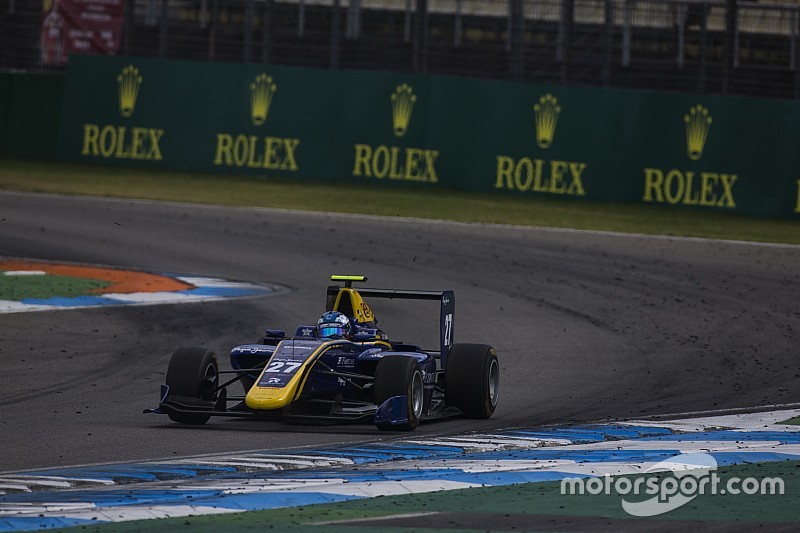 Jake Hughes was victorious in the GP3 sprint race at Hockenheim, securing his own and DAMS' first victory in the series.

Having gotten a better launch off the line, Arjun Maini took the lead from Hughes and kept the counter-attacking Briton at bay during the opening lap.

Hughes was all over Maini at the main straight a lap later and managed to make a move just when the VSC was deployed due to Artur Janosz crashing at Sachs.

Janosz was hit by Ralph Boschung at the hairpin and was carrying another car's front wing as well as a puncture.

Championship leader Alex Albon was another victim of the same corner as he received a nudge while turning and had to retire in the pits.

Hughes was investigated for overtaking under VSC but eventually escaped a penalty.

Maini had a delayed reaction at the restart and dropped to sixth, giving Charles Leclerc second.

Santino Ferrucci also got ahead of Jack Aitken on the restart but the latter fought back to reclaim third.

Hughes led the rest of the race and opened up a comfortable gap as Leclerc started to struggle for tyre wear.

Aitken caught up with the Ferrari junior on the penultimate lap and claimed second at the hairpin with ease.

Despite quickly losing further ground, Leclerc kept the final podium position, less than a second ahead of Ferrucci.

Following Albon's retirement, Leclerc retook first in the championship with a lead of three points.

Maini: "I've got my head around" GP3 transition