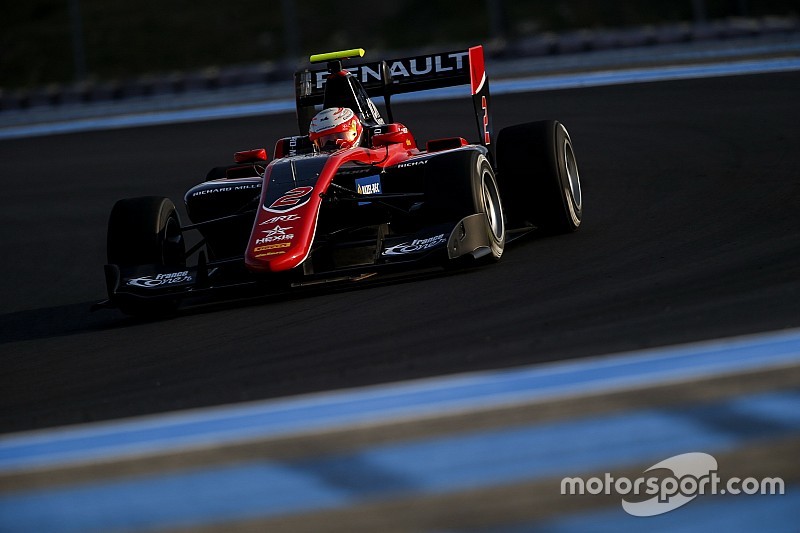 Anthoine Hubert topped the times on the second and final day of the first 2018 pre-season GP3 test ahead of Ferrari Formula 1 junior driver Callum Ilott at Paul Ricard.

The ART Grand Prix pair set the best times of the day during the morning running, with Campos Racing’s Leonardo Pulcini ending up third quickest.

On an overcast day at the southern French circuit, Hubert and Ilott traded the top spot early on with their ART teammate Nikita Mazepin, with Trident’s Alessio Lorandi also spending time at the head of the standings.

After the teams concentrated on long runs mid-way through the morning, Hubert put in a time of 1m48.674s with 40 minutes of the session remaining.

That pushed Ilott down to second and he wound up 0.087s adrift of his team-mate – who finished fourth in the 2017 GP3 standings for ART – with Pulcini slotting a late effort of 1m49.051s to take third.

The best times from the morning remained unbeaten during the afternoon, with only Pedro Piquet and David Beckmann improving as the lunchbreak and light rain prevented any fast times from being posted late-on.

Force India development driver Mazepin – who will drive for the team in the first F1 pre-season test next week – ended the day fourth fastest, ahead of Tatiana Calderon (Jenzer Motorsport) and Jake Hughes, who had set the fastest time on day one for ART.

Lorandi ended up seventh, with Simo Laaksonen, Piquet and Dorian Boccolacci rounding out the top 10 for Campos, Trident and MP Motorsport respectively.

The next GP3 test takes place at the Jerez circuit on 14-15 March.

Stadium Trucks to race at eight Supercars rounds in 2020