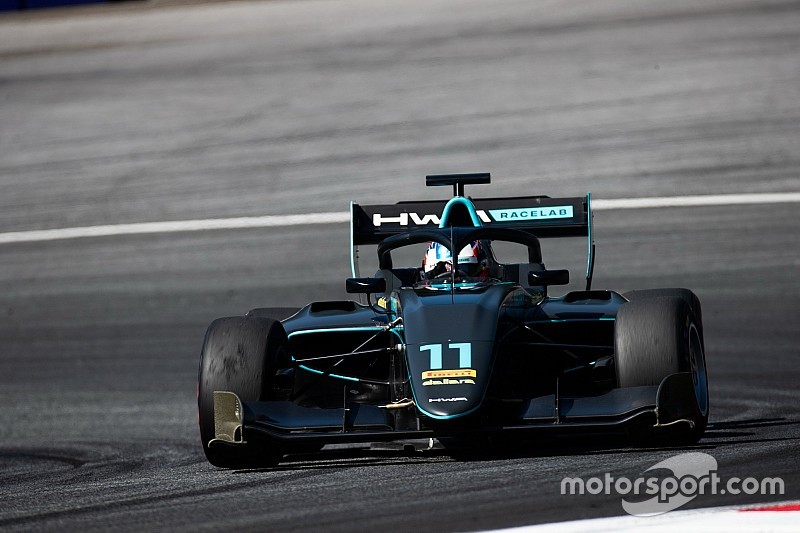 Reigning German F4 champion and Sauber Junior Team driver Lirim Zendeli held pole, but a lock-up at Turn 3 was the beginning of a slide down the order, points' leader Shwartzman and Hughes assuming the fight for the lead.

Shwartzman's Prema Racing teammate Armstrong then mugged Hughes for second at Turn 9 on lap five of 24, assuming an all-Prema fight for the lead with Hughes watching on, within DRS range behind.

The fight moved the three clear of the pack, even more so after a virtual safety car on lap 12.

With five laps remaining, Armstrong set the fastest lap and moved out of DRS range of Hughes, allowing the front two to scarper away and fight for victory.

On consecutive laps, Armstrong passed Shwartzman at Turn 3, with the latter using the undercut and DRS to retake the position at Turn 4, before another VSC as Campos Racing driver Alex Peroni took out his teammate Sebastian Fernandez with three laps to go.

The VSC ended heading onto the last lap.

Armstrong went to the outside of Turn 3, and the two made contact with Shwartzman, clipping Armstrong's right-rear, as the latter had got ahead entering the corner. Armstrong went into the run-off before dropping to 19th with a puncture.

Just after the chequered flag, the Russian was given a five-second penalty, handing the win to Hughes.

Hughes had finished just one tenth behind Shwartzman on the road after the incident, as the Prema driver struggled with a damaged front wing.

Jehan Daruvala took second after working his way through the order successfully, the key move being jumping Max Fewtrell for fourth on lap 19 of 24.

Shwartzman took third after the penalty, with Fewtrell holding onto fourth ahead of a charging Leo Pulcini for Hitech Grand Prix.

Pulcini's teammate Juri Vips fell down in the early stages mysteriously, but fought back to add sixth to his Saturday race one win, making a key move on Zendeli which took him most of the race, in the closing stages.