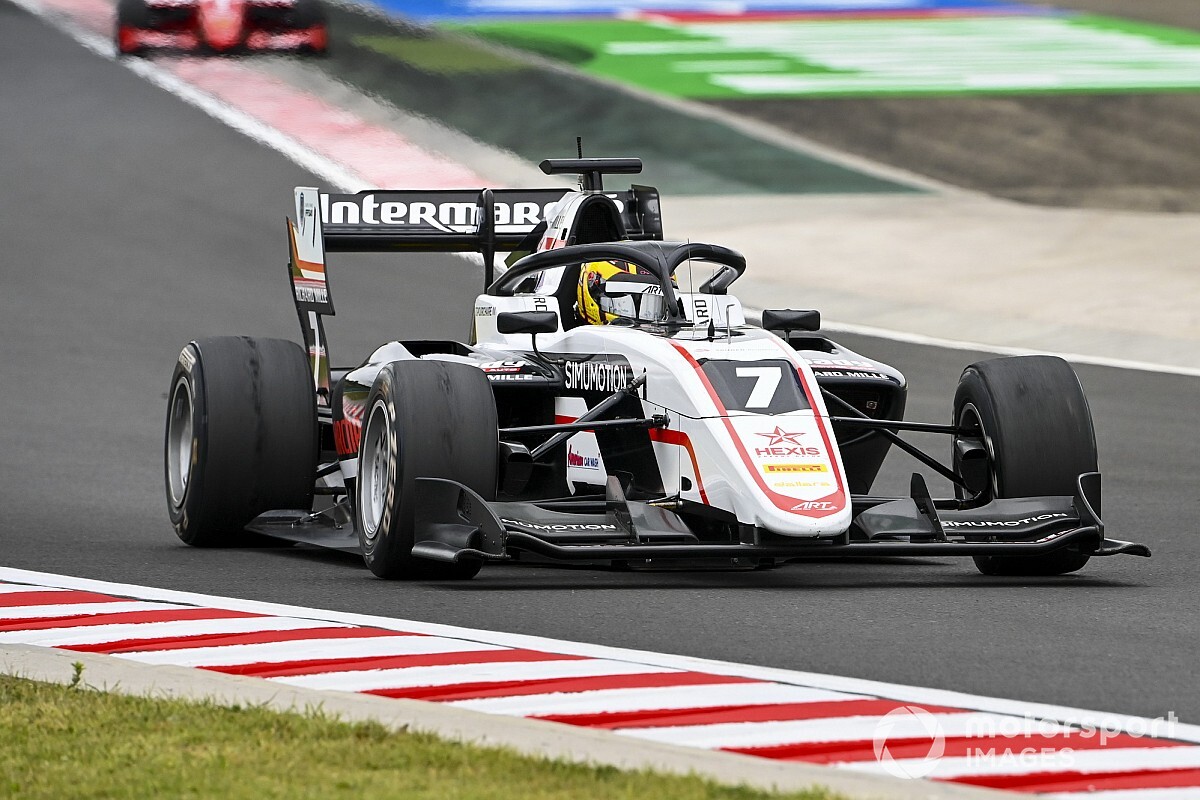 Last week Pourchaire became FIA F3's youngest-ever winner in Austria, and the 16-year-old Frenchman backed that up with a stellar drive on a damp Hungaroring.

Pourchaire beat Prema duo Oscar Piastri and Logan Sargeant by over ten seconds after an incident-filled race that was interrupted by a red flag.

At the start, second-starting Sargeant attempted to pass polesitter Alexander Smolyar on the inside of turn one, but on a damp track the American Prema driver lost control of his car and knocked the Russian out.

Sargeant’s spin triggered havoc behind him as several drivers made contact, with his Prema teammate Frederik Vesti and Jenzer's Calan Williams two of the main victims. Smolyar, who had taken a superb pole in the wet on Friday, was forced to retire on the spot, while the safety car was brought out to bunch up the field.

At the restart Pourchaire, who had started third, successfully defended the lead he inherited against the third Prema car of Piastri.

Behind the duo, Sargeant continued to struggle keeping his Prema on track and was hounded by Red Bull junior Liam Lawson.

However, Lawson’s challenge soon faded when the Kiwi's engine expired in spectacular fashion, which brought out a second safety car.

Several cars behind Lawson went off on his oil, which left a perilous trail from pit exit all the way through turns one and two. The race was soon red flagged to clean up the spill.

The lengthy stoppage allowed the Hungaroring marshals to clean up the oil, and also gave the track the opportunity to dry up.

At the front Pourchaire quickly pulled a gap to Piastri, while Sargeant was leading a train with Fernandez, Verschoor and Viscaal.

Fewtrell quickly fell through the order due to steering issues, while Fittipaldi - who had gained 12 places in the opening melee - lost a potential points finish after being handed a drive-through penalty for a pitlane infringement during the red flag.

As Pourchaire checked out, a mistake by Piastri allowed Sargeant to get in DRS range of his Prema teammate, but the Australian soon restored a safe margin.

Verschoor was the man on the move in the leading pack, the Dutchman quickly passing his MP Motorsport teammate Viscaal and also overhauling a struggling Fernandez for fourth.

Viscaal soon followed his fellow countryman through to fifth in a strong showing for the Dutch outfit. On the final lap of the race, Viscaal made a daring move to take fourth place back from Verschoor.

Fernandez came home sixth ahead of Peroni, Dennis Hauger and Clement Novalak. David Beckmann rounded out the top 10 and inherits the pole for Sunday’s second race.

Piastri strengthens his lead in the championship, while Sargeant jumps over Vesti to second place.