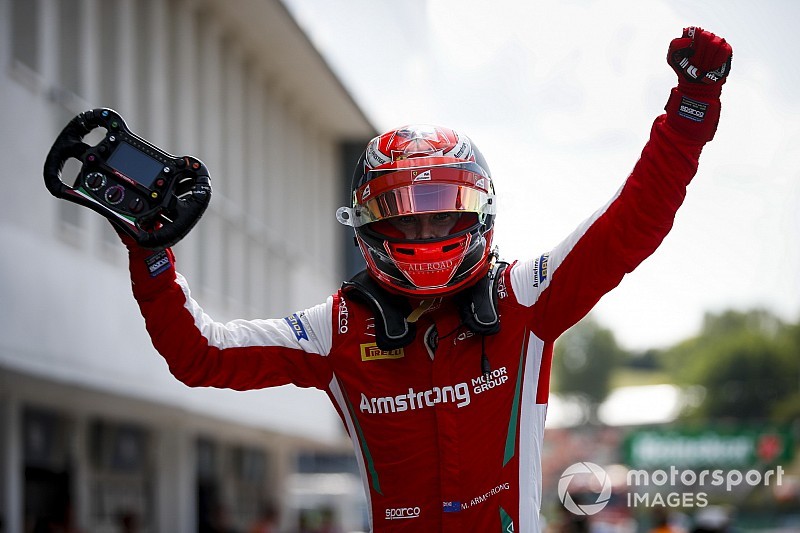 Polesitter Armstrong had to see off a strong challenge from fellow front-row starter Leo Pulcini at the start, as the Hitech driver tried to go around the outside of Turn 2.

The pair touched at the corner exit, but Armstrong was just able to maintain the lead around the outside of Turn 3 as Pulcini lost momentum on the inside.

Both drivers then pulled away from the chasing pack, Armstrong pulling away from Pulcini to the tune of 12 seconds to become the seventh different race winner in 10 races this season.

While Armstrong and Pulcini disappeared out front, Carlin’s Felipe Drugovich held up a train of cars in the fight for third for the majority of the race.

That was until lap 14 of 22, when Shwartzman tried to go around the outside at Turn 2 and clipped the right-rear of Drugovich, giving the Brazilian a puncture.

Shwartzman himself sustained front wing damage and fell rapidly down the order, eventually retiring for the first time this season.

That allowed the Russian driver's nearest rival in the championship, Red Bull-backed Juri Vips, up into third, while Max Fewtrell’s ART Grand Prix-run car moved up to fourth.

Two laps later, Fewtrell ground to a halt at the exit of the chicane, allowing Vips to escape.

However, HWA driver Jake Hughes erased a huge gap to the Estonian and ultimately passed Vips at Turn 1 to take the final podium spot for a second race in a row.

Vips’s fourth-place finish means he is now 10 points behind Shwartzman in the championship.

Jehan Daruvala moved up from 11th on the grid to claim seventh for Prema, while Carlin driver Logan Sargeant took eighth and the final point with it.