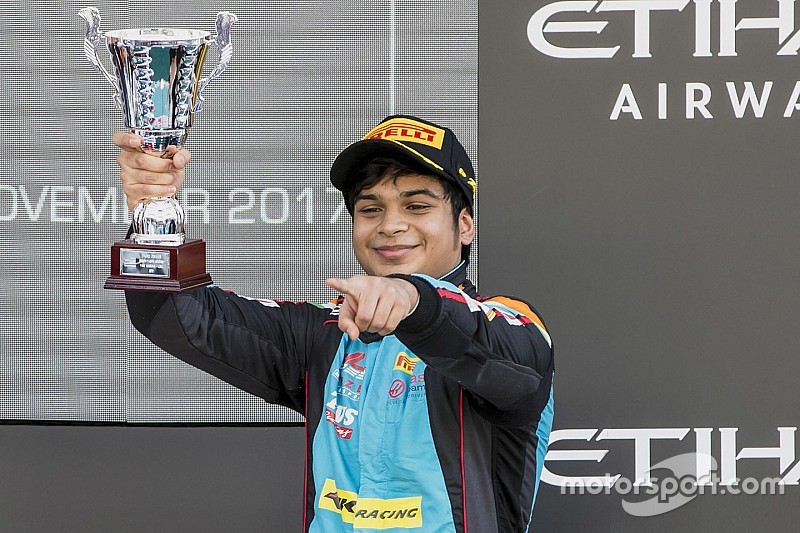 Arjun Maini was officially classified ninth in the 2017 GP3 standings following a podium finish in the curtain-closing Abu Dhabi round.

With a time of 1m55.466s, Maini qualified fifth for the weekend’s opening feature race, putting himself in a prime spot to sneak a podium finish.

The Jenzer driver picked off Macau GP winner Dan Ticktum on the opening lap and then settled behind Leonardo Pulcini.

Two laps before the chequered flag, Pulcini suffered a slow puncture, elevating Maini to third place. It was the 19-year-old’s first podium appearance since he claimed victory in the Barcelona sprint race in May.

The second race of the weekend, in contrast, was less satisfying for Maini. The Indian driver started sixth based on reverse grid and spent much of the race battling with GP3 champion George Russell

The former British F4 teammates traded places once, before Russell made a decisive move on lap 10 and demoted Maini to seventh place.

Once behind Russell, Maini came under pressure from the other ART of Anthoine Hubert, who likewise was able to pass him.

Maini stood a chance to move back up the pack when the Ardens of Niko Kari and Steijn Schothorst collided on the penultimate lap, forcing the latter into retirement.

The 19-year-old launched a stern attack on Kari, who was carrying a damaged front wing, and briefly managed to get past the Finn. However, in the chaos that ensued, Kari was able to immediately regain position and Bruno Baptista also jumped ahead by going off the track.

Baptista received no post-race penalty for the incident, leaving Maini eighth in the classified order.

After eight rounds and 16 races, he finished ended ninth in the final standings with 69 points to his name.

Update: Kari and Baptista were penalised post race, elevating Maini to sixth in the final classifications. With the change in order, Maini finished the season with 72 points, six behind eighth-placed Ryan Tveter.