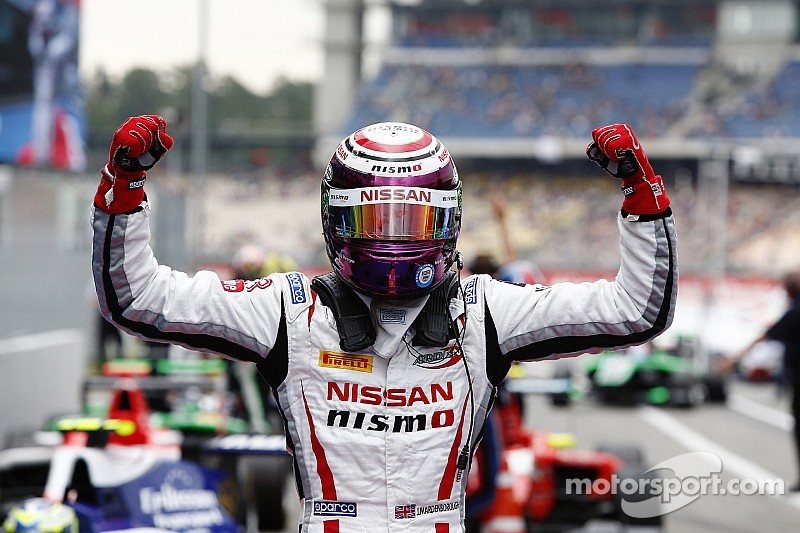 Rookie Jann Mardenborough enjoyed his first taste of champagne in GP3 after recording his debut win and his first rostrum of the season too. The Brit drove a commanding race from reverse pole to see home Dino Zamparelli (ART Grand Prix) and Jimmy Eriksson (Koiranen GP).

Rain threatened Race 2 of the 2014 GP3 Series after light rain fell only minutes before the race got underway but a few drops could not make an impression on a very hot track.

The Arden International driver made a good clean start with Zamparelli stealing a position from Eriksson to sneak into second. Series leader Alex Lynn was also on the move and he was up to fourth, demoting Nick Yelloly (Status Grand Prix).

There was contact on lap one between Sebastian Balthasar (Hilmer Motorsport) and Pal Varhaug (Jenzer Motorsport), the Norwegian driver having to retire from damage sustained in the incident.

Mardenborough held an advantage of just under a second to Zamparelli, with a small gap forming back to Eriksson in third. Red Bull Junior driver Lynn was on the attack and began pressuring the Swede for the rostrum place whilst a juicy battle for P6 developed between Emil Bernstorff (Carlin), Dean Stoneman (Marussia Manor Racing) and Race 1 winner Marvin Kirchhöfer (ART Grand Prix).

Kirchhöfer made contact with Bernstorff, the two collided and both ended their race prematurely in the pitlane. At the midway point of the race, Mardenborough increased his lead at the front to 2.5s, driving a calm race. Stoneman continued to fight through the pack with Yelloly his next victim.

As the laps ticked down with drivers’ managing tyre degradation, nobody was going to stop Mardenborough from pocketing his first win in the category – and the first of the campaign for Arden International after a lights to flag victory. Zamparelli achieved his best result in GP3 with second, whilst Eriksson maintained his consistency with an important podium, keeping his Series rival Lynn at bay in fourth. Stoneman, Yelloly, Patric Niederhauser and Richie Stanaway completed the points’ positions.

Lynn remains on top in the Drivers’ Standings on 112 points with Eriksson closing the gap marginally, the Swede sits on 94. Kirchhofer, Bernstorff and Stanaway complete the top five on 80, 73 and 69 respectively.

Carlin holds the lead in the Teams’ Standings on an impressive 189 points with ART Grand Prix rising to P2 on 125 points, two points ahead of the third placed team Status Grand Prix.

There is no rest for the wicked with GP3 back in action next week at the Hungaroring in Budapest on the 25-27 July.

GP3 travelled to Budapest for Round 5