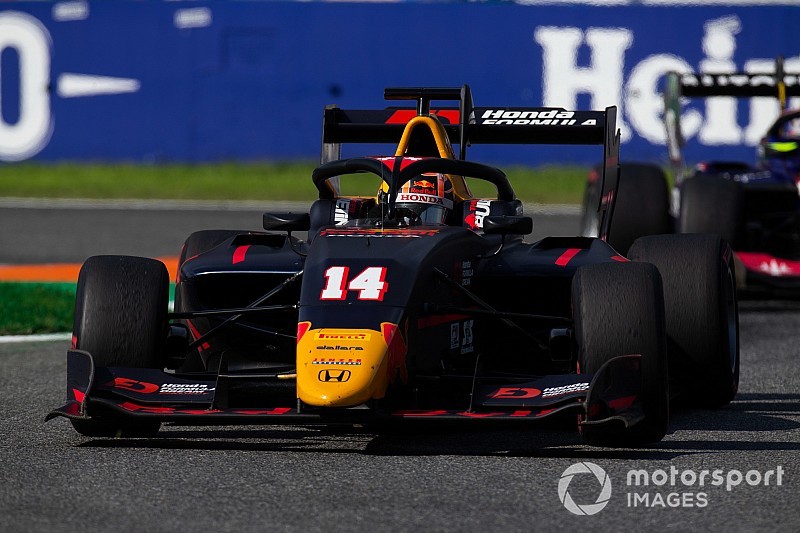 HWA driver Jake Hughes vaulted from third on the grid to the lead at the start, and established a cushion of nearly three seconds on a soaking wet track.

Tsunoda quickly climbed from sixth to second, edging clear of his rivals just before the halfway point before reeling in Hughes as the track dried.

The Jenzer driver dived past Hughes at Turn 1 on lap 15 of 22 and began to build a gap, as fellow Red Bull-backed driver Liam Lawson challenged Hughes.

Lawson had made an awful start from second on the grid but worked his way back through the order, passing Hughes one lap after Tsunoda had made the same move.

MP Motorsport driver Lawson ran out of time to challenge Tsunoda, who took the chequered flag by 1.3 seconds to deliver Jenzer's first win of the season.

Hughes came under pressure from another MP driver, Richard Verschoor, but just held on for third.

Polesitter Fabio Scherer dropped back as the track dried and had to settle for seventh, narrowly holding off championship leader Robert Shwartzman on the last lap.

Ferrari and SMP Racing-backed Shwartzman couldn't make progress from his starting spot of eighth but nonetheless consolidated his points lead over Prema teammate Jehan Daruvala, who finished out of the points in 13th.

It means Shwartzman heads to his home round in Sochi with a lead of 33 points over Daruvala, with 48 on offer.

A poor run out of Ascari challenging Sauber Junior Team driver Scherer meant Shwartzman almost lost eighth to ART Grand Prix's Renault junior Christian Lundgaard, who missed out by less than a tenth of a second in a drag race to the line.

Championship contender Juri Vips (Hitech) struggled to move forward after the first two laps, in which he climbed from 25th on the grid to 15th, finally ending up 11th.

Marcus Armstrong ended up 14th, one place behind Prema stablemate Daruvala, recovering after being tagged into a spin by ART driver David Beckmann at Turn 1.