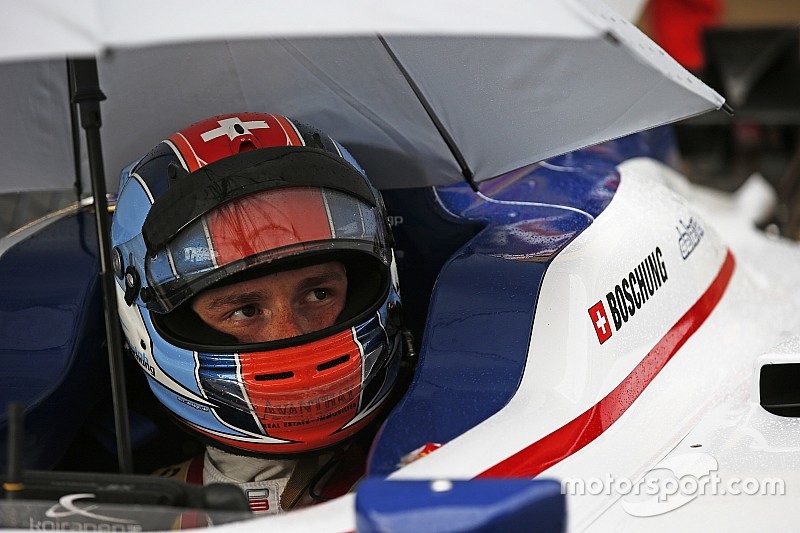 In doing so, Boschung ended the ART winning streak that had kicked off the season, the Swiss driver having taken advantage of contact between reverse-grid poleman Jake Hughes and Matt Parry during a brief green-flag stretch.

With the rain pouring down before the scheduled start of the race, race control took the decision to kick off proceedings under the safety car - and it would be a while before anyone turned a lap in anger.

But even under safety car, the machinery was not having it easy. First, Kevin Jorg stalled his DAMS car at the start, before Nirei Fukuzumi, running second on the road, pulled over to the side and eventually called it quits in the pitlane.

Matevos Isaakyan and Richard Gonda would likewise come to a halt as the field cruised under safety car, but, just as suspicions that the entire required race distance would be run in this way began to creep in, race control called the safety car in on lap nine.

Hughes, leading the field, maintained his advantage into Turn 1, but opted to block Parry on corner exit and was spun around as a result, as Parry himself picked up damage to his car.

As such, Boschung stormed past teammate Parry into Turn 2, and the Welshman continued to tumble down the order.

The safety car was back out at that point for another few laps and, on the next restart, Saturday winner Charles Leclerc - having been shuffled down the order in the earlier melee - hit Tatiana Calderon, and then collected her teammate Jake Dennis into Turn 1.

That was more than enough mayhem for the race to be neutralised again - and there was no time left for another restart.

As such, Boschung took victory, with Alex Albon fighting his way through to his second runner-up finish of the weekend and Antonio Fuoco making up the podium.