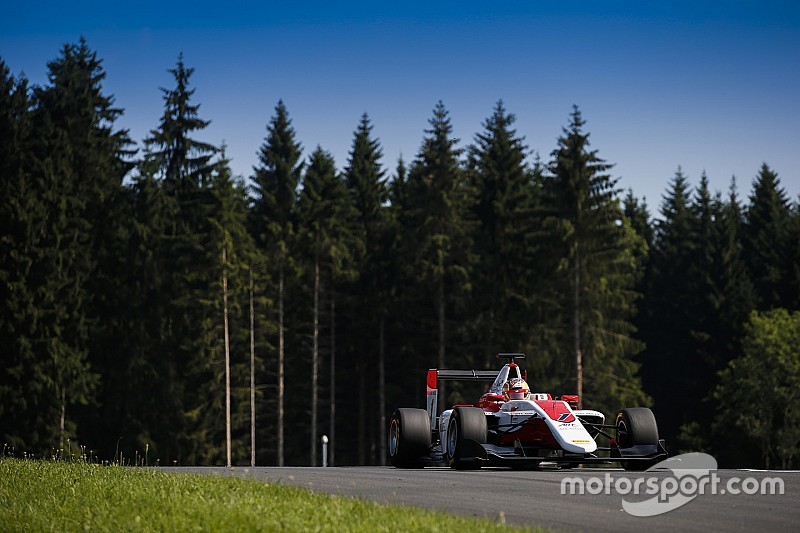 GP3 championship leader Charles Leclerc took his second win in the category in the first race at the Red Bull Ring, shrugging off a slow start and late rain.

Leclerc headed home an ART 1-2-3, controlling the pace of the race in the dry but losing a fair bit of time when the rain arrived in the closing stages.

A lightining start from third on his Barcelona debut gave Leclerc the early lead and a subsequent victory, but it was an entirely different story here, the Monegasque losing first place after a slow getaway.

Instead, Alex Albon was into the lead, while Ralph Boschung then picked off Leclerc round the outside of Turn 1.

But Leclerc responded immediately, retaking second place into Remus, before diving down the inside of Albon for the lead into Schlossgold and making the move stick.

From that point on, the poleman began to significantly gap Albon, who himself came under pressure from another ART driver Nyck de Vries after the Dutchman had cleared Boschung.

But, as Leclerc's lead was up to six seconds, rain arrived at Turn 2 - as it had previously done in GP2 - significantly complicating matters yet again.

The wet patch of the track forced Leclerc to run wide on first approach, albeit his chasers made the very same mistake that time around.

But the changing conditions proved tougher on the Monegasque than his teammate Albon, who had decreased the gap to just two seconds at the chequered flag but ran out of time to challenge for victory.

While de Vries completed the ART podium lockout, Oscar Tunjo, who took his maiden GP3 win at the track last year, looked set to finish fourth, but was given a black-and-orange flag when a rearview mirror fell off his car.

As such, the spot went to Ralph Boschung instead, with Antonio Fuoco fifth - the Italian having cleared Matt Parry when the Welshman ran wide.

Nirei Fukuzumi was the last of the ART quartet in seventh, with Jake Hughes getting reverse-grid pole for Sunday in eighth and Jack Aitken and Sandy Stuvik making up the top 10.