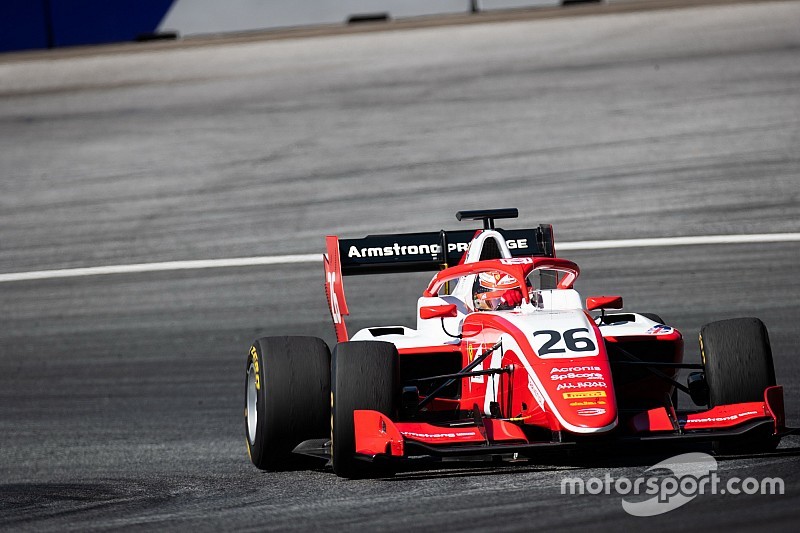 Armstrong looked the class of the field early on, establishing a laptime strong enough for pole before the drivers headed out for final efforts late in the session.

But a two-lap showdown was set up when Logan Sargeant crashed his Carlin-prepared car into the barrier at the final turn with just over four minutes to go, after a wheelie had left him unable to steer and he crashed heavily into the wall, apparently unhurt.

Just before the stoppage, the Hitech drivers Juri Vips and Leo Pulcini bailed themselves out of a drama by jumping into third and fourth respectively.

The Red Bull-supported Vips had been 22nd and Pulcini 16th, but both improved just before the Sargeant-induced red flag and were the only drivers who had time to do so before the incident.

Vips then improved further after the session went green to take second, but was jumped by the last car in the session to complete a lap, ART Grand Prix driver and reigning Formula Renault Eurocup champion Max Fewtrell.

Fewtrell was 0.123s behind Armstrong for his best qualifying of the season so far, ahead of Vips and the second Prema Racing-run machine of Jehan Daruvala.

The third Prema car of points’ leader Shwartzman had been fourth and four tenths off pole when he pulled off the track on the run to Turn 4 early in the session.

His car was wheeled back behind the barrier and he took no further part. The SMP and Ferrari-backed Russian will start the race 12th, having not qualified lower than third or finished lower than fourth so far this season.

Behind Daruvala in fourth, Fewtrell’s teammate and fellow Renault junior Christian Lundgaard moved up to fifth late on, ahead of Paul Ricard pole-sitter Jake Hughes.

The HWA driver was knocked down from fourth where his late lap had initially put him.

Pulcini had to settle for seventh with his last effort, while Trident Racing’s Pedro Piquet moved up the order late on to secure eighth.

David Beckmann made sure all the ART drivers made the top 10 in ninth, while Sebastian Fernandez should have secured a best qualifying of the season in 10th for Campos Racing, but driving through a pitlane red light in practice docked him three places on the grid.

Therefore, reigning German F4 champion Lirim Zendelli is promoted into the top 10 on the grid. Just one second covered the top 25 in the session, the closest the field has been in its three rounds so far - and only 0.4s separated the top 10.

Series debutant Giorgio Carrara was the best of the Jenzer drivers, qualifying 22nd on his season debut. His Red Bull-backed team-mate Yuki Tsunoda – who drove from 27th to seventh in the Paul Ricard feature race – was 27th in qualifying again.